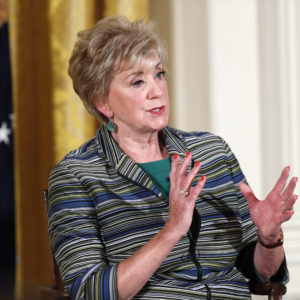 The term “infrastructure” brings to mind roads and bridges, sewers, and public works projects. These sorts of projects are often supported as a means of boosting hiring in the short term and as a form of investment in future economic growth. Communication has generally been viewed as something outside of infrastructure. Given Americans’ increasing reliance on the internet, however, these divisions are becoming more artificial. As the Trump administration looks for ways to help small businesses, the infrastructure of the information highway is becoming as much of a focus as the interstate highways.

McMahon’s talk both highlighted the unique technology needs of small businesses and reiterated the Trump administration’s support for entrepreneurs. Small businesses are still feeling the effects of the recession and are increasingly finding that remaining successful in the current economy requires fast and reliable internet. In urban areas, this has not been a problem, but many parts of rural America still lack access to reliable high-speed internet. For the administration, broadband infrastructure is an important tool for helping small businesses succeed.

One way in which the administration hopes to support small businesses is by encouraging high-speed internet and broadband access in rural areas. While larger cities have begun to experiment with the internet of things, other areas of the country struggle to get enough bandwidth to reliably stream video. Increasingly, the U.S. does not have an internet access problem, but it has difficulty insuring broadband access in certain areas. Although about 25 percent of the U.S. lacks access to broadband, only 13 percent lacks internet access completely.

Statistics show that investment in tech is a boon for the economy, allowing businesses to generate higher earnings, develop new industries, and empower consumers.

“These technological advancements are good news for entrepreneurs and U.S. workers. We shouldn’t be afraid of them, but recognize them for the opportunities they offer,” said Ray Keating, chief economist for the Small Business & Entrepreneurship Council.

Although investment in rural broadband is needed, designing a top-down program would likely be very costly. Estimates on the price tag for nationwide deployment range widely. According to a study by Microsoft, high speed internet could cost the country $8-$12 billion, while other estimates range as high as $20 billion. That is a high price tag for a system that would also require expensive future maintenance.

“High speed internet should be a priority, but when we think about what businesses actually need, how we look at solving this problem begins to change,” said Will Rinehart, director of technology and innovation policy at the American Action Forum. He noted that many rural areas did not demonstrate a desire for higher speed access until more recently.

“There isn’t a grand conspiracy to keep broadband speeds low,” he said. “The fact is, fast broadband reflects the demand by individuals for faster internet speed.”

As a result, he advises considering other options for getting people online, keeping in mind that different solutions will likely arise in different areas of the country.

While faster, more reliable internet access will certainly benefit businesses in some areas, Rinehart cautioned against treating broadband as a “silver bullet” that would suddenly turn rural America into a center of programming. He noted that Kansas City saw tech companies enter after Google Fiber was introduced several years ago. However, many of these companies later left, finding that the area was not able to offer the access to capital and education that they needed.

The experience of Kansas City shows local lawmakers how important it is to work with industry figures when crafting policy. Often the biggest hurdle and largest source of delay when rolling out new technology in a given area is regulatory uncertainty. Without a fixed timeline for regulatory approval, projects become more expensive.

“Policy will never keep up with technology so it is very important to streamline government processes,” said Chelsea Collier, founder of Digi.City, a project she uses to share her research on the future of the smart city. This lowers the cost for infrastructure projects and opens a space for innovation.

At the end of the day, that is the focus of government efforts in the field of information infrastructure investment. By expanding access to high speed internet and broadband, McMahon and others hope to spark small business growth in underserved regions of the country.