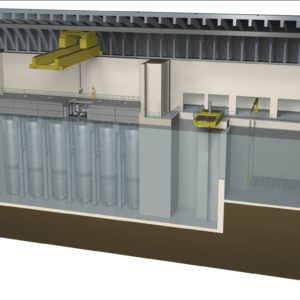 Nuclear power was supposed to be the energy for the future. Unlocking the atom would allow for seemingly endless supply of clean, cheap power, said futurists in the 1960s. Instead, atomic energy became another boom that wasn’t, as fears about radioactive waste and contamination grew. In the U.S., relatively little research has gone into developing new nuclear technology, meaning that the remaining plants in operation use aging designs, while new construction is mired under red tape. With the administration signaling that coal and nuclear plants may receive federal subsidies, the attitude towards atomic energy may be shifting, with a number of signs pointing to a potential renaissance for small scale nuclear reactors, and nuclear generation as a whole.

“Nuclear energy is an essential component of the U.S. energy mix, and by teaming up with the private sector to reduce costs and improve safety, we are keeping America ahead of the curve in advanced reactor design and technology,” said U.S. Secretary of Energy Rick Perry earlier this week, when he announced the winners of $24 million in DOE grants.

Small scale nuclear has been a goal of Perry’s for several months and the project seems to be even more a focus of his department after a memo leaked suggesting that President Donald Trump was planning subsidies to keep aging coal and nuclear plants on line. At present, America’s nuclear fleet is decades old and the only plant currently under construction is wildly overbudget and behind schedule.

The need for new technology, especially small scale reactors that lower the risk of a core meltdown, is evident. One such plant is currently planned for Idaho, with the goal of starting operations in the mid 2020s. NuScale, the company building the plant, reached an important milestone at the end of April, when it secured a key safety certification from the Nuclear Regulatory Commission.

These small scale reactors operate quite literally on a much smaller scale. While traditional reactors built today will generate about 1,000-1,600 MW of electricity, small scale reactors range between 50 and 200 MW. Their size means that they may be a reliable power solution for small communities in remote areas, like parts of Alaska, or for U.S. military bases overseas. These molten salt reactors are designed to be too small for a meltdown risk, since overheating the liquid sodium coolant causes it to expand and shut down the reaction.

Alaska Senator Lisa Murkowski (R) and others are pushing to change regulations to help create a supply chain for nuclear fuel and to remove unnecessary hurdles.

“The bill was recently advanced by the Senate Committee on Energy and Natural Resources. We need the Department of Energy to establish such audacious, yet attainable goals for pushing US advanced reactor technologies to market.”

NuScale, the one company working on such a small scale nuclear project in the U.S., is continuing to tweak the technology. This week, it announced that through advanced testing and modeling tools, it had managed to increase its small modular capacity by 20 percent, a change that will help make the reactor even more price competitive with other generation methods.

“Based on the refined state-of-the-art computer modeling now available, NuScale was able to demonstrate a 20% power increase while fully satisfying design and regulatory requirements,” the company said.

The changes boosted the capacity of NuScale’s planned generator from 600 MWe to 720 MWe and followed rigorous testing of the fuel and helical coil steam generators. Effectively, the changes will lower the cost of electricity produced by the plant about 18 percent, helping it to come closer to its goal of $65/MWh. This price would make the nuclear plant competitive with other generation sources coming online in the area in 2022.

It is all a step in the right direction for clean energy. What some clean energy advocates are beginning to realize is that nuclear power can play a key support role for intermittent generation methods like wind and solar. Going even further, a push to take nuclear plants offline could actually retard emission reduction progress because these generators operate on a much larger scale than wind and solar projects.

“Nuclear’s role in meeting New England’s greenhouse gas goals is underappreciated, but the numbers are sobering: When the 680 megawatt Pilgrim reactor closes next year, it will remove in one day more zero-emission electricity production than all the new windmills and solar panels Massachusetts has added over the last 20 years,” cautioned one Boston Globe editorial after a plan was announced to close the state’s Pilgrim Reactor.

The question may be one of timing. After all, utilities in New England and other parts of the country are considering shuttering aging plants immediately, while small scale reactor technology remains a few years in the future. The delay puts the U.S. at risk of falling behind in the global nuclear energy race.

While nuclear growth has slowed in the U.S., it has made rapid expansion in many parts of Asia, particularly in China, where 37 nuclear generators are in operation, producing 35.6 GW of power. An additional 19 units and 21.9 GW of generation capacity are under construction.