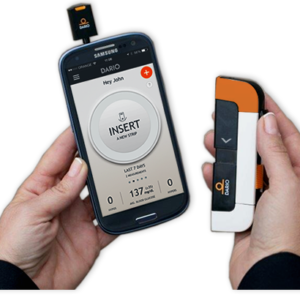 Posted to Politics August 22, 2018 by Robert Graboyes and Sara Rogers

If you want better health for more people at lower cost, look beyond the D.C. Beltway, the state capitals and even America’s borders. For one example among many, the Dario Blood Glucose Monitoring System’s story exhibits many of the hallmarks of how and why technological innovation occurs in health care — and how it succeeds.

According to some estimates, diabetes may account for a mammoth 10 percent of America’s health care spending and a great deal of personal suffering. Nearly 10 percent of Americans suffer from diabetes, with an additional 20 percent exhibiting signs of prediabetes. The disease can ravage sufferers — pain, amputation, disability, massively reduced quality of life, and enormous expense among the results.

Erez Raphael, the Israeli founder of Tel Aviv-based Dario, was an accomplished technologist in areas of software development outside of health care. He struggled with severe diabetes, inspiring him to attack the malady that attacked him. His creation shifted part of the burden of care away from the scarce inventory of health care providers and toward the vast number of sufferers who, no doubt, are as motivated as Raphael to beat back the illness.

That creation was a small, handheld device that, in tandem with a smartphone, lets individuals with diabetes track their own glucose levels. Traditional glucose monitors, in contrast, are clunky, require batteries, and deliver slow readings. The Dario device’s website (mydario.com) and customer reviews boast that it can record a reading within six seconds. Patients can easily upload, track and chart results. Importantly, if the patients’ metrics indicate that he is incapacitated, the app itself knows to summon emergency assistance.

The technology allows patients to assume a greater degree of responsibility for their own care by combining glucose monitoring with the many tasks inherent in self-monitoring this complex ailment. The app tracks food intake and exercise, for example, through a simple patient interface. Convenient input and comprehensible output help reduce the number of crisis situations that require costly, inconvenient medical care — and draw resources away from other patients.

Cost, too, is important. According to Dario’s website, the device costs around $70. Premium services, which run $20-$25 per month, provide test strips, progress reports, advisory reading, check-up calls with specialists, progress summaries and so forth — a modest cost, compared with, say, the cost of a single visit to the emergency room.

However, for every such device that hits the market, there are many others than never do. A prime culprit is our own regulatory system (and those in other countries, as well).

Some innovations fail to pass muster because they are, in fact, inferior products. However, some never reach consumers because the hurdles necessary to clear the Food and Drug Administration approval process are too lengthy, expensive or uncertain.

In his book “Innovation Breakdown,” Joseph Gulfo described the disastrous process that drowned his start-up company, which had created a device to monitor moles for potentially deadly melanoma. (The device was ultimately approved, but only after the approval process badly damaged his company’s finances.)

Ultimately, regulators are likely to find that the status quo is not an option. The internet and inexpensive international travel allow patients and innovators to circumvent regulatory burdens. Nightscout — a network of computer programmers with diabetic children — created and shared remote glucose monitor technologies under the slogan/hashtag #WeAreNotWaiting. Sites like Arudino allow creators to share their ideas online. Command-and-control regulation may turn out to have been a fleeting 20th-century phenomenon.

The current pace of high-tech innovation makes the early 21st century a remarkable time. It’s important that the legal and regulatory environment encourage rather than discourage great breakthroughs.

Robert Graboyes is a senior research fellow with the Mercatus Center at George Mason University, where he focuses on technological innovation in health care. He is the author of “Fortress and Frontier in American Health Care” and has taught health economics at five universities. Sara Rogers is a former Mercatus research assistant and a student at UNC-Chapel Hill.