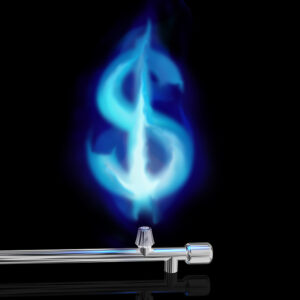 There’s a slow-motion train wreck unfolding for U.S. consumers. Inflation is on the rise — and is now hitting a four-decade high. If consumers aren’t yet feeling the full effects, they will soon.

What’s driving these price hikes? A number of issues are converging, including pandemic recovery, supply chain disruptions and Russia’s invasion of Ukraine. But energy is driving this inflationary train, and now soaring oil prices are being joined by rising natural gas costs.

This isn’t good news for U.S. families — since it comes just as annual inflation is already hitting a whopping 8.5 percent. Soaring gas costs mean higher heating bills as well as higher electricity prices, particularly in states that lean on gas for power generation. For example, the steady rise in natural gas prices has already meant a 30 percent hike in electricity costs in New England. Unfortunately, that jump in costs is likely just a preview of what’s to come.

There isn’t relief in sight. Domestic gas demand is as strong as ever and U.S. natural gas exports — particularly to Europe, as it tries to pivot away from Russian energy supplies — have reached all-time highs. The Department of Energy projects that 20 percent of America’s natural gas production will be exported next year.

What all this means is that higher prices are here for the foreseeable future. While gas producers will respond to high demand and high prices — and will try to ramp up production — don’t expect immediate relief. The global energy crisis has made its way to American shores and there aren’t quick fixes.

However, there are actions and policy changes that can happen right now to ensure we can better insulate America’s consumers from price shocks in the future, or at the very least, not make these inflationary problems worse.

A good place to begin is ensuring we maintain a balanced energy mix as we navigate the energy transition. While renewable additions are picking up speed, wind and solar power remain compliments to our energy system, not foundational pieces.

Ensuring we have affordable, reliable, and secure energy when we need it means better valuing the balance provided by our existing coal and nuclear power generation. These two sources of baseload power meet more than 40 percent of our electricity needs, and in many states even more. But poor electricity market construction and a misguided regulatory agenda mean too many of these power plants have been forced into early retirement right when they’re needed most.

Coal and nuclear power provide a hedge against higher natural gas prices. And they act as a stabilizing force while we attempt to negotiate the uncertainty and complexities of greater reliance on sources of power that rely on the whims of the weather.

While the administration has taken steps to help nuclear power plants remain online, President Biden’s regulators at the Environmental Agency are doubling down on their efforts to accelerate coal plant closures in the midst of an energy crisis that is contributing significantly to the biting pain of inflation. That’s energy policy malpractice America’s consumers can’t afford.

The return of natural gas price volatility and the full-throated arrival of the global energy crisis requires energy pragmatism. Ensuring energy-driven inflation doesn’t wreck economic recovery means using every tool at our disposal to shield consumers from price spikes and to ensure secure, reliable American energy makes it to the marketplace. Embracing the value of the existing coal fleet as a bridge to the future — not as a problem to be solved — is just the kind of pragmatic policy pivot we need.