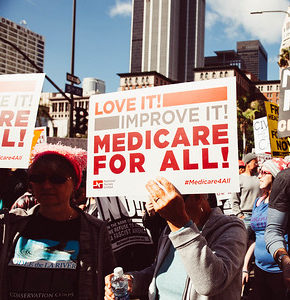 As an American, I’m proud to live in a country that is built on the inalienable rights of its citizens and the sacred principle that “all men are created equal.”

However, as the parent of a child with spinal muscular atrophy (SMA) Type 1, I’ve realized that when it comes to our healthcare system — from rationing of care to the push to adopt drug policies from socialist nations — we don’t always live up to our American promise.

When the Americans with Disabilities Act was enacted in 1990, it was intended to prevent the imposition of subjective views of “quality of life” onto people like my son to justify denying him treatment.

Dr. Louis Sullivan, secretary of the Department of Health and Human Services under President George H.W. Bush, agreed in 1992 when he rejected Oregon’s efforts to impose a discriminatory metric called the quality-adjusted life year (QALY) to determine coverage under the Medicaid program.

The QALY is a metric that assigns a person living with disability a lower value of life than a “healthy” person, typically meaning their treatments are also worth less. The QALY’s discriminatory nature was validated in 2010, when Congress barred the QALY from use in Medicare. And more recently, the State of Oklahoma passed a law banning its use.

Unfortunately, COVID-19 has resurrected this un-American idea of rationing healthcare. States have sought to advance Crisis Standards of Care that allow them to deny care for people with disabilities and serious medical conditions. This logic is not dissimilar from the devaluation of life that underpins the QALY.

Meanwhile, as states actively ration care, the Trump administration issued an executive order that ties the prices we pay for prescription drugs to prices in foreign, socialist countries where QALYs provide the rationale for restricting coverage and access. This is the same concept as a recent bill pushed by House Speaker Nancy Pelosi and progressive democrats.

The White House’s Council of Economic Advisers (CEA) estimated, this idea “could lead to as many as 100 fewer drugs entering the United States market over the next decade.” This has a human cost: it could mean no cure for my son.

President Trump has repeatedly railed against government takeover of healthcare policies, like Medicare-for-All.  In his State of the Union address this year, he promised  “we will never let socialism destroy American health care.”

The president is right to oppose socialized healthcare — these policies would result in massive tax increases, threaten American leadership in medical innovation, and undermine our healthcare system that promotes excellence through competition. However, rather than fighting these socialist policies, the president’s drug pricing executive order embraces them.

The reality that these policies are laying the groundwork to rip healthcare away from vulnerable citizens became too real for me when learning about Michael Hickson, a paraplegic slowly recovering through occupational therapy with the support of his wife and five children.

When he arrived at the hospital in Austin, Texas, with COVID-19, doctors decided — without his wife’s consent — that his life was not worth saving, despite having the resources to do so.

Having moved to Austin in 2017 for my husband’s job, I panicked that our disabled son could be similarly affected.

My kids and I temporarily relocated back to our old home in St. Louis, Missouri. We know and trust our team of health providers at St. Louis Children’s Hospital, and we trust that the city and state have a health system that value all peoples’ lives.

But now, I worry that due to the president’s executive order, I may not be able to protect my son, even by returning to my conservative roots in St. Louis.

We will all face a top-down challenge if the federal government forces every state into a system that references foreign health care models. It is imperative that we as Americans maintain the right to seek and receive the individualized health care we need.

If we continue down this current path, we will drift further away from our inalienable rights: life, liberty, and the pursuit of happiness.

Khrystal K. Davis is the mother of Hunter, a child with Spinal Muscular Atrophy, Type 1. She is the founder of Texas Rare Alliance, and the author of “Hunt for a Cure: An Unexpected Adventure to Save a Life.” She holds a Juris Doctorate from Stetson University College of Law. Davis wrote this for InsideSources.com.