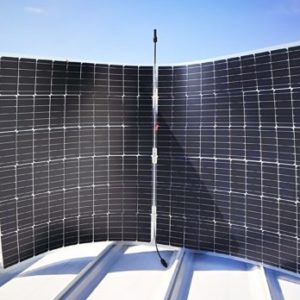 Solar Gets Partial Reprieve From Tariffs on Imports

The U.S. Court of International Trade ruled Thursday that dual-sided solar panels can be excluded from tariffs on imported solar components.

The decision came on the same day as the U.S. International Trade Commission undertook a mid-term hearing on the tariffs that levied a 30 percent tax on imports starting in 2018. The tariffs are scheduled to drop by 5 percent annually for four years. By law, any tariff lasting longer than three years must have a mid-term review.

The excluded panels — called bifacial modules for their ability to harness sunlight on both sides — were granted a reprieve in June. But in October, the Trump administration reversed that decision. Industry analysts at the time said it was hard to gauge the impact of that exclusion or who stood to benefit the most since bifacial panels account for less than 1 percent of global installation — albeit with higher efficiencies than single-faced modules.

“It was a punch in the gut to solar,” Abigail Ross Hopper, president of the Solar Energy Industry Association (SEIA) that spent the days in the run-up to Thursday’s hearing marshaling support, said of the decision to reverse the exclusion. SEIA and several solar companies challenged the decision and cheered the ruling, which said that the revocation was likely improper.

SEIA released an analysis earlier this week during a media call arguing that the tariffs are costing the U.S. more than $10.5 million per day in unrealized economic activity, caused 10.5 gigawatts of solar installations to be canceled, and will cost 62,000 jobs and $19 billion in new private sector investment. That is enough to power 1.8 million homes and reduce 26 million metric tons of carbon emissions. The report also said that for each job created by the tariff, another 31 jobs are lost.

In 2018, there were 243,343 solar workers in the U.S. with 64 percent in installation and about 14 percent in manufacturing, according to the Solar Foundation.

“The tariffs have slowed the pace of solar adoption, slowed down the growth of solar,” Ross Hopper said. “We continue to grow but not nearly at the rate it was projected to and not nearly the rate consumers want it to.”

But others argue that the industry’s growth is due to the unfair advantages it gets from federal and state government largesse, said Thomas Pyle, president of the Institute for Energy Research. The federal investment tax credit for solar installation began at 30 percent but drops to 26 percent next year. Originally set to expire in 2007, Congress has extended the credit through 2021. After that, there will no credit for residential systems while commercial owners can take a 10 percent deduction.

“The government giveth and the government taketh away,” Pyle said. “When you build your business model around government favoritism, you should expect there to be some good and some bad. All energy sources should be on a level field.”

The solar tariffs are part of President Donald Trump’s push to protect American companies from threats from China. It’s not the first time the U.S. has tried to use tariffs on import solar products.

In 2012, the U.S. Department of Commerce announced a 31 percent duty in solar products imported from China, which had begun to significantly subsidize its homegrown solar industry. Chinese manufacturers, however, began importing cells made in other countries, assembling panels in China to get around the duties.

Soon after Trump announced the 2018 tariffs, Jinko Solar, a leading Chinese company, announced it would build a $410 million plant in Jacksonville, Fla., creating 800 new jobs. Although analysts said the investment had been planned for some time, it was considered a win for Trump at the time.

Tariffs are one means of trying to regulate trade. Asking the World Trade Organization — which China was allowed to join in 2001 after being required to make significant changes to its economy — to step in is another.

The U.S. has a mixed record of challenging China in the WTO. The Trump Administration favors tariffs over filing complaints as a way to address what it calls “unfair” trade practices. A 2018 report from the U.S. Trade Representative’s Office said filing WTO cases “along is naïve at best” and can distract policymakers from focusing on China’s “non-market policies.”

Thursday’s hearing was part of the U.S. International Trade Commission’s responsibility to monitor activity and economic impacts related to tariffs. The commission will issue a report to the Administration and Congress. A commission spokeswoman said Trump has not specifically asked for advice regarding the solar tariffs.