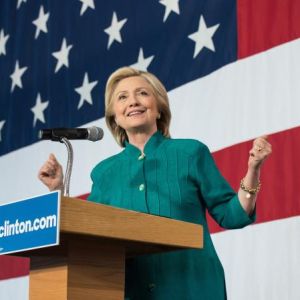 Some Democrats, Including Hillary Clinton, Hesitate On a $15-An-Hour Minimum Wage

When Hillary Clinton huddles with key labor leaders at a private meeting in Washington later this month, the minimum wage is sure to be a topic of discussion.

Clinton supports raising the wage, but as Politico reports, “she has not explicitly endorsed a $15 an hour minimum” akin to what’s in place in Los Angeles, Seattle and San Francisco.

Backed by the Service Employees International Union, the “Fight for 15” has become a priority for some progressives, and it already has the support of at least two other Democratic presidential candidates: Bernie Sanders and Martin O’Malley.

Still, with the White House and congressional Democrats behind the idea of just $10.10 an hour, jumping on the $15 bandwagon isn’t necessarily an obvious choice for Clinton, including from a policy perspective.

As Matthew Yglesias wrote for Vox last month, “while it is easy to find left-of-center wonks and economists who favor minimum wage hikes and have generally positive things to say about the Fight for $15 campaign, it’s a little difficult to find one who’ll come out and say definitively that he or she thinks a $15-an-hour minimum wage is a good idea.”

Yglesias argues that “there has to be some point at which a minimum wage costs jobs; no one thinks a $50-an-hour minimum would be workable, for instance. There’s a real fear that while a boost to $10.10 an hour wouldn’t do much, a hike to $15 is big enough to have significant negative effects.”

This fear helps explain why some cities are pursuing more modest wage increases.

On Wednesday morning in Washington, D.C., Mayor Muriel Bowser held a press conference announcing the District’s new $10.50 minimum. She noted that the rate will go up to $11.50 next summer and then be indexed to inflation.

When InsideSources asked why $15 an hour wouldn’t be right for D.C., Bowser talked about keeping the city’s business climate competitive with those of adjacent Maryland and Virginia:

A big discussion, as you will remember from the [D.C.] Council last year, was what are the surrounding jurisdictions able to do as well. While we weren’t able to move our friends in Virginia, we were were pleased that our neighbors in [Maryland’s] Montgomery County and Prince George’s County also increased their wages. We think that continues to put us in a competitive place, because we want to continue to be a place where businesses locate.

Questioned about local activists who are pushing for $15 an hour by way of a ballot initiative, the mayor said she was “looking forward to whatever they come up with.” However, Bowser also declined to take a position on the potential ballot measure.

“It doesn’t exist just yet,” she said.

Only time will tell if Bowser feels the need to adopt a different posture.

For what it’s worth, D.C. Councilmember Elissa Silverman, a progressive independent, told InsideSources she would support the proposed ballot initiative.

Of course, this would be a moot issue if a President Hillary Clinton were to enact $15 an hour nationally. It just doesn’t look like that’s happening anytime soon.