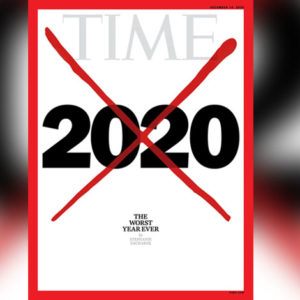 Sorry Time Magazine, but 2020 Is Not the ‘Worst Year Ever’

Really, Time Magazine? 2020 is the “Worst Year Ever?” I will take this year over any year before penicillin, indoor plumbing, electricity and regular trash collection.

We do not know what history will say of 2020. Here in the United States it will be a story of a virus and its consequences, wildfires and hurricanes, and a closely divided, hotly contested election. But most years have natural disasters. Contested elections are nothing new. We also have periodic epidemics, though the coronavirus is certainly an unusually dangerous — and sudden — threat.

In January, we heard rumors of an illness connected to Chinese bats;  by February it was striking Italy and Iran; in March everything in America shut down; and by November a vaccine had been created, for a virus not even identified when the year began.

The year 1919 saw the end of the “War to End All Wars,” but Europe was devastated. President Woodrow Wilson implored the U.S. Senate to ratify the Treaty of Versailles which he had negotiated lest “we break the heart of the world,” but the world’s heart seemed broken.

The treaty imposed hefty reparations on the war’s losers, preventing their revival, and distributing their Asian, African and Middle Eastern territories and peoples among the European winners. The subsequent turmoil in those places continues today. A rising Soviet Union exploited the chaos of Europe (and ultimately the rest of the world) to thwart nascent democratic movements.

Meanwhile, the movement of armies and navies around the world in 1919 helped spread one of the deadliest flu viruses in history. The 1919 Spanish Flu killed an estimated 50 million people, mainly the young and healthy.

As for political turmoil, anarchists sent bombs to three dozen government officials and business leaders — including John D. Rockefeller, Oliver Wendell Holmes, the mayor of Seattle and a newspaper editor from Jackson, Mississippi. The housekeeper for U.S. Sen. Thomas Hardwick (D-Ga.) had her hands blown off when she opened one of the packages.

A bomber trying to deliver his package to Attorney General A. Mitchell Palmer accidentally set it off, blowing up himself and Palmer’s porch (the house had to be demolished). Little wonder that Palmer began rounding up anarchists.

As William Butler Yeats wrote that year: “Things fall apart; the center cannot hold; anarchy is loosed upon the world.”

Almost 50 years later, the world struggled through another Annus horribilis: 1968.

Martin Luther King’s assassination may have been the low point, but it was a year filled with brutal lows. The Tet Offensive convinced the American public that the Vietnam war was lost despite their leaders’ assurances that victory was near.  North Korea captured the intelligence-gathering USS Pueblo. (The captured ship remains in Pyongyang to this day.)

Soviet tanks crushed Czechoslovakia’s brief Prague Spring, and the Hong Kong flu killed more than a million people around the world, 100,000 in America.

What do we learn from the year now ending?

Not simply to stop complaining, because bad things — and worse — have happened to better people.  The miraculous fact is that despite all these perils and terrors, we are still here.

Recall that in that terrible year of 1968 Martin Luther King told us he had seen the promised land. Remember that in 1933 — another that some historians have called THE WORST YEAR EVER (depth of the Depression!  Nazis come to Power!) — Franklin Roosevelt assured us that “this nation will endure as it has endured, will revive and prosper,” and “the only thing we have to fear is fear itself.”

We may feel as though we are going ahead in the darkness, in 1968 without a Martin Luther King, or 1933 without Roosevelt. But their genius was not to summon the better angels of our nature, but to remind us of them.

We have seen ample evidence this year of their existence, and this potent reminder of our capacity to do good should light our way through any dark times to come.

Robert Allison teaches history at Suffolk University and the Harvard Extension School.  He is the author of The Crescent Obscured:  The United States and the Muslim World, 1776-1815 and other books. He wrote this for InsideSources.com.