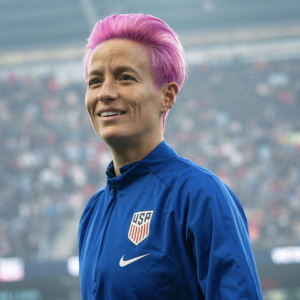 Sounds About White: Liberals Whitesplaining to an Asian Conservative

Megan Rapinoe, a sports and media darling with the support of the mainstream media, corporate America, and millions of soccer parents everywhere recently decided to make a lighthearted comment about Asians. It probably would probably have been laughed off in 2012 (“Why are you being so sensitive?”). In 2021, when awareness of race is at an all-time high, it’s really jarring.

Her tweet said, “u look Asian with those closed eyes!” Ironically, her Twitter account features “Black Lives Matter” as her profile picture. Well, Megan, do you believe Asian lives matter, too? Do you believe in #StopAsianHate or are you perpetuating annoying and in some cases, truly damaging stereotypes?

Before I even became political, I noticed the tendency of many probably well-meaning people to instantly assume they understand a great deal about me solely because of my race. They think Asians are timid and will take “jokes” and bullying without any pushback. Asians just take it quietly, right, and work harder? This assumption can be so damaging. What a limited worldview to imagine you know anything about a person based solely on their skin color or eye shape. Dare I say… racist?   Such assumptions are also about condescension and arrogance.

Let me talk about some of these arrogant assumptions.

It’s arrogant to think Asians are a privileged minority when most of us (or our parents) came to the U.S. with very little and sacrificed everything to build a comfortable life. The laser-like focus on academics our parents instilled in us?  It’s so we can be effective and productive citizens in U.S. society.

It’s arrogant to openly create admissions policies around the idea that Asians are less likable and to use that as a college admittance metric. Yes, that’s going on in certain elite colleges — like Harvard — and affirmative action in general.

It’s arrogant to think that just because I’ve identified as a conservative, you can basically negate everything I’m about and throw me in the “bad Trumper” pile and threaten me for even daring to express a viewpoint different from yours. That’s not diversity of thought and not very “tolerant.”

It’s arrogant to appropriate Asian culture and cast White people in our Hollywood roles, steal our stories, and then rail on about White conservatives as supposed racists when conservatives are the ones who gave us a helping hand as we struggled to build lives here starting out. That’s why so many of us escaped to the “racist” suburbs of Orange County from the racism-ridden streets of diverse Los Angeles!

It’s arrogant to attack traditionally “Asian” values — like being family-oriented, pro-life, faithful to a merit-based system, respectful to others, and fiscally responsible — as “outdated” and to encourage us to rebel against our parents and destroy our family units. As Greta Thunberg would say, “How dare you!”

Megan, you really think this second generation of Asians, who are tired of being boxed into your lame stereotypes, isn’t going to call out your hypocrisy and hold you accountable for your words? Chrissy Teigen, half-Asian, was recently called out, vilified, and had her products canceled by everyone from Macy’s to Target over some tweets from years ago.  This was today. Are you listening, #Victoria’s Secret, to what your new partner in rallying support to causes vital to all women, is tweeting about how they look?