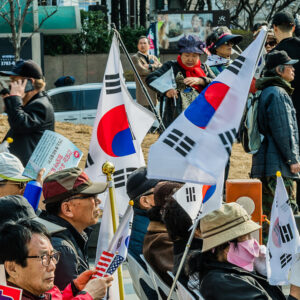 Talk of “human rights” presents South Korea with a terrific headache. No way could President Moon Jae-in go along with U.S. President Joe Biden’s decision not to send a bunch of bigwigs to consort with Chinese officialdom at the upcoming Beijing Winter Olympics. South Korea is too close to China on a number of levels to have joined the U.S. and its Anglo-Saxon soulmates, the United Kingdom, Australia, and Canada, in spurning China’s big show.

“Human rights” inspire as much controversy and debate as any other issue in diplomatic relations. Abuses are one big reason why Biden ordered the diplomatic boycott of the games. and they’re one reason, among others, for the latest U.S. sanctions against North Korea.

Luckily, of course, the U.S. is not boycotting the games as such. That is, American athletes will be doing their thing as will Brits, Australians, and Canadians. The millions glued to TV and mobile phone screens will still see all those glittering and gleaming leaps and jumps, mad dashes, and bruising collisions on snow and ice as at the last winter games in Pyeongchang in 2018. The games will not suffer for the absence of a few grinning, handshaking, happy-talking diplomats and bureaucrats whom no one ever heard of. No one in the vast viewing audience gives a damn about those boring faces in VIP boxes.

As for the decision of South Korea, America’s ally from the Korean War, not to join the boycott, surely no offense was intended. What choice did Moon have? China is not only the South’s biggest trading partner but also the big brother of North Korea, with which Moon is striving mightily to get along.

Ah, but here we get to the question of human rights inside North Korea — or rather, more accurately, the absence of human rights up there. U.S. and United Nations sanctions are primarily in retaliation for the North’s missile and nuclear tests and the refusal of Dictator Kim Jong-un to stop making more of them, but they’re also to protest the North’s record of imprisonment, torture and killing of anyone remotely opposed to Kim dynasty rule.

Pathetically, a lot of people in both Korea and the U.S., salivating over an end-of-war agreement that they swear will truly open an era of North-South Korean goodwill, would rather forget about the North’s egregious human rights record. Moon’s people are all too aware of how North Korea responds to the mere mention of human rights. They scrupulously avoid the term while pleading with the Americans, please go along with what will no doubt be a highly ambiguous statement to the effect that the Korean War is really and truly over.

As if that kind of pressure were not enough, pro-Northers in the U.S. are eager for the U.S. not only to support the end-of-war deal but also to stop supporting the South militarily. They’re urging the U.S. Congress to pass a bill declaring the Korean War is over while echoing North Korea’s demands for the withdrawal of U.S. troops and an end to sanctions.

One topic about which pro-Northers are quite sensitive is that of human rights in North Korea.  They blame U.S. policy and the current “state of war” for the suffering of North Koreans while avoiding questions about the North’s vast gulag system in which millions have died and at least 100,000 are now held.  One favorite tactic is whataboutism.  Ask about abuses in North Korea, and they respond, what about all the abuses in the U.S., what about your police brutality, overcrowded prisons, inequality, poverty, and all the rest?

South Korean diplomats and bureaucrats do not generally parry questions about North Korean abuses in such an off-putting way. Rather, they would like the skeptics to believe that honestly the end-of-war agreement will be an important step toward normalizing relations, after which the North will no longer threaten anyone with nukes and missiles and tens of thousands of troops poised above the demilitarized zone.

The inference is that North Korea, unthreatened, will downsize its huge military establishment and focus on domestic problems, after which those nasty images with which we are familiar will go away. Above all, the South Koreans really want the Americans to stop making a ruckus about North Korean abuses for fear, horrors, Kim Jong-un will not go along with any agreement at all.