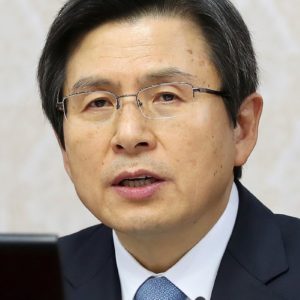 Hwang Kyo-ahn, chairman of the Liberty Korea Party
[IS] Opinions

WASHINGTON — South Korea’s President Moon Jae-in has been trying so hard to achieve the impossible dream of reconciliation with North Korea that it’s easy for foreign observers to forget a strong, traditional conservative opposition that deeply opposes the pattern of concessions to the will of North Korea’s leader Kim Jong-un.

Almost no one in Washington, including analysts at influential think tanks, has paid much attention to the role of Hwang Kyo-ahn, chairman of the Liberty Korea Party, former acting president and former prime minister, who’s been offering the sort of constructive criticism that’s sorely needed in a democratic system.

Those Americans who seriously follow Korean affairs will vividly recall the demise of Park Geun-hye as president in the Candlelight Revolution of 2016-2017, but Hwang’s service as acting president between the time of Park’s arrest and the election of Moon two years ago is a forgotten historical detail. His rise to leadership of the Liberty Korea Party, however, means that his voice cannot be forgotten even if his name is barely known outside South Korea.

The fact that Moon and his minions would like to silence Hwang and members of his party in the sorely divided national assembly only shows how much his voice is needed to bring about understanding of what’s going on. In a democracy, such opposition is totally necessary to curb the ambitions of power-hungry leaders and those surrounding them as they pursue policies that are not going to work.

Hwang, as conservative leader, brings long experience and strong views that are obviously needed to unite a party that’s been factionalized and uncertain in the face of the Moon government’s drive to solidify its own power. He clearly believes Moon and his aides are dominated by a socialist philosophy that endangers the democracy that they claimed to uphold when leading the movement to bring down Park Geun-hye.

The position of the Liberty Korea Party has seemed to gain strength under Hwang while Moon’s government represses free expression in the media, notably the television systems that are really government controlled. The party has stood firm against endorsing the declaration signed by Moon and Kim Jong-un at Panmunjom in April of last year and defied attempts to isolate and undermine conservatism in a society that remains deeply skeptical of ideologues at the center of power to compromise with a regime that remains uncompromising in its refusal to give up its nuclear program.

Hwang enraged the Blue House most effectively last month when he characterized Moon as “Kim Jong-un’s spokesman” for his efforts at getting the U.S. and United Nations to do away with sanctions imposed after North Korea’s nuclear and missile tests. At one of those rallies in central Seoul at which conservatives wave Korean and American flags, he said frankly that Moon had been “running around everywhere asking for sanctions to be lifted.”

Basically, from the U.S. viewpoint, Hwang’s remarks reflected concerns that Moon and his aides would like eventually to dispense with the historic U.S. alliance under which the U.S. has been committed to defense of the South ever since the Korean War. Moon has put on an appearance of cooperation with President Donald Trump but was clearly disappointed by the failure of the second Trump-Kim summit at the end of February. Trump has stubbornly maintained the sanctions in the face of pressure from Moon and his ministers while putting on a show of enduring friendship with Kim, to whom getting rid of sanctions is a priority.

Hwang faces a challenge within the assembly from a scheme that would increase the number of leftist members by a system of allocating extra seats in an election reform program that would benefit leftists and liberals. Quite accurately, he observed that one-time student activists formed “the core” of the forces around Moon in the Blue House. Over the last two years, Moon has expanded his authority by naming many of them to key positions in government ministries, agencies and entities. Moon people show up in leadership posts in the media and national labor unions, all needed to repress the Liberty Korea Party.

Hwang speaks in language that’s anathema to the Blue House but are vital to the national debate. Lambasting the election reform scheme, he accused the Moon administration of having “completely focused on a leftist scheme in political engineering without paying any thought to gaining the people’s support by improving their livelihood.” As the country wallows in economic difficulties, such words resonate among millions, notably young people who simply can’t find jobs.

Hwang’s years in top government posts, climaxed by several months as acting president, provides the experience for him to see through efforts at repressing his party. He also is able to come up with ideas and suggest policies that national leaders should take seriously. No doubt we will see and hear much more of him while all sides gear up for the next presidential election and the chance to restore South Korea’s position as an effective bulwark against communist expansion under Kim Jong-un.