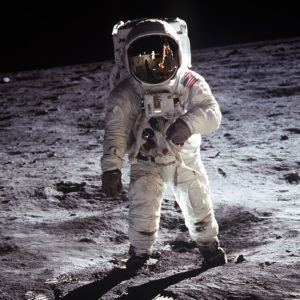 Spacesuits, Shmacesuits; No Need for Human-Led Forays into Space

It looks like mankind won’t be going back to the moon … on schedule, at least. According to a recent report by the National Aeronautics and Space Administration’s (NASA) inspector general (IG), astronaut suits have been delayed by two years due to an array of technical, funding, and COVID-related challenges. But, the unavoidable conclusion, “a lunar landing in late 2024 as NASA currently plans is not feasible,” is hardly surprising given NASA’s string of failures in trying to take humanity back to the lunar surface. The failures also speak to a larger strategic mistake that places inordinate importance on planting flags on alien worlds despite the practical and scientific disadvantages of that approach.

Humanity can venture to infinity and beyond while avoiding the black hole of wasteful spending.

The American people might have reasonably assumed that developing spacesuits is not a problem for NASA. After all, the water cooled, nonflammable Apollo-era suits seemed to pose little problem for pioneers such as Neil Armstrong and Buzz Aldrin. But recent problems with current spacesuit design first started to surface in 2017 when the IG reported, “despite spending nearly $200 million on extravehicular spacesuit development over the previous 9-year period, the Agency remained years away from having a flight-ready spacesuit to use on exploration missions.”

Since that report, NASA spent an additional $220 million on developing a new spacesuit. And total spending will wind up costing the agency (and taxpayers) more than $1 billion ahead of human-led exploration missions. For all of this spending, NASA hasn’t done a great job of explaining why new-and-improved spacesuits are even necessary.

According to the IG, the next-generation suits will, “feature a new design to accommodate a broader range of sizes and improve fit, comfort and mobility,” a response to complaints that existing spacesuits don’t fit all body types. The suits are also designed to avoid the “bunny hopping” seen in the original moon exploration footage. It’s frankly unclear why NASA cares so much about increasing the fit and flexibility of their suits.

The truth is that tens of thousands of applicants are anxious for the chance to explore foreign worlds, and these willing astronauts don’t seem too hung up on spacesuit limitations. Even if NASA has better reasons for designing a new suit, the process would undoubtably be less expensive if they relied on outside contracting. SpaceX has already offered its services, and chances are a privately-designed spacesuit wouldn’t cost $1 billion.

Cost considerations aside, the focus on spacesuit design neglects the bigger picture. Perhaps it’s time for policymakers to question the wisdom of human exploration missions. Despite bipartisan hype, manned missions to outer space are notoriously overrated. Robotic missions are a far more cost-effective way of discovering the skies above. Cambridge Cosmology and astrophysics professor and astronomer royal Martin Rees rightly points out that, “the practical case (for human spaceflight) gets weaker and weaker with every advance in robotics and miniaturization.” Besides, even successful, temporary human missions to other worlds won’t translate into successful long-term habitation. Mars is probably the top contender for an outer space colony, yet even the red planet would need to be extensively terraformed to make it livable for humans. The simple act of growing food is basically impossible on Mars, no matter how many billions of dollars NASA spends on the endeavor.

Regardless of which spacesuits astronauts don in the future, it is time to rethink the Earthly obsession with sending humans to explore other worlds. Naked robots are far better at extraterrestrial endeavors than bundled-up astronauts.