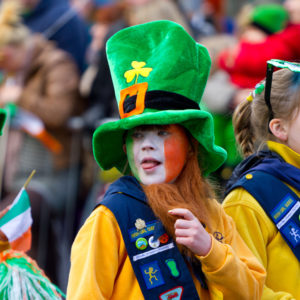 St. Patrick’s Day and the Irishing of the World

The Irish are an accommodating people. Well, not in everything but in some things. They share their culture with the world. Then they incorporate into Irish life modifications that other nations, especially the United States, have made.

Take St. Patrick’s Day. It was traditionally a dour day of religious observance in Ireland. Then Irish-Americans turned it into the festival that we celebrate here. And now St. Patrick’s Day is celebrated in Ireland much the way it is here: joyously.

Likewise, corned beef and cabbage. That was a cheap dish that got its Irish identification among the poor immigrants in New York. It wasn’t a tradition in Ireland where thick bacon, lamb and salmon, served with an astonishing array of potato options, is standard fare along with battered cod — fish and chips to the rest of the world. But in an accommodation to visitors, corned beef and cabbage can now be had in the big hotels.

A word about those potatoes: If you can think of preparation for potatoes, you might find them offered. Never, in my experience, are less than three varieties available in a restaurant. At a banquet once, I was offered a choice of chips (French fries) duchess, sautéed, boiled, croquette, mashed and scalloped.

What isn’t seen in Irish restaurants are baked potatoes — although, to please visitors, they may be sneaking into the hotels. In my nearly four decades of annual travels in Ireland, I learned that baked potatoes, known as jacket potatoes, are street food — to be bought with all sorts of great fillings from stalls, food trucks and the like, not in restaurants and pubs.

Irish stew is also less common than you would expect.

The Irish do drink, but in their own way. As Ireland has become a modern, competitive country, people are drinking less. But drinking is part of the fabric of daily life, just as drinking coffee, tea (hot or iced) and soft drinks might be elsewhere. You do business in Ireland over a drink, celebrate with a drink, mourn with a drink and, well, just have a drink because that’s what you do between what you just did and what you’re going to do. A breather, you might say.

For 20 years I was the American organizer for an Irish summer school. Summer schools — there are more than two dozen — are more like themed think tanks that meet only in the summer, often just for a long weekend. They cover literature, music, politics and are named accordingly, like the Yeats International Summer School and the Parnell Summer School.

The one my wife and I were affiliated with was the Humbert International Summer School, named for the French general sent to Ireland in 1798 to help with the uprising against the British, which was put down brutally by Gen. Lord Cornwallis, fresh from his American defeat. Humbert was sent back to France — the English not having a beef with the French at that moment. He had an affair with Napoleon’s sister and was ordered to New Orleans, where he passed his days drinking with Lafitte, the French pirate and privateer, teaching French and living his exiled life in style. He did fight bravely in the Battle of New Orleans and helped the American forces with his military skill. He died in New Orleans and is buried there.

Back to the welcoming of American embellishments to Irish traditions. These are not resented in Ireland because of the great affinity of the Irish have with their 35 million or so kinsmen in the United States. The Irish enjoy the American stage and screen songs of Ireland, like “When Irish Eyes Are Smiling.” The Little People of Ireland’s folklore are beginning to look like Disney’s Seven Dwarfs.

That doesn’t mean that the Little People are not alive and well, it’s just that their presence has been enhanced by legends that came from Hollywood as much as from the Auld Sod. A friend of mine built a wall around his mother’s retirement house in Cork. But her neighbors insisted that it have a gap for the Little People to go through — so it has a gap.

As for the fairies, my wife and I were riding in northwest Ireland and our guide told us it was all right to ride through a copse, but we shouldn’t let the horses disturb the fairy circle there. He rode around the copse to be sure he didn’t upset the fairies.

Despite the drink, the Little People and the fairies, Ireland is the computing capital of Europe and hopes to take over as a financial center after England loses many banking houses due to Brexit.

Sláinte! That’s the equivalent of cheers as you raise a glass. Do that Sunday or the Little People, or the fairies, or your Irish friends may be upset. You’ve been warned.