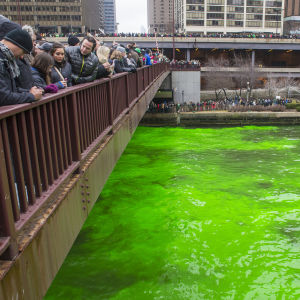 St. Patrick’s Day and the Delicate Matter of Irish Immigration

St. Patrick’s Day is hard upon us. The green dye is being added to the beer in bars across the land, while more than 40 million Americans will remember their linkage to the Old Sod, even if that is sometimes tenuous.

Aye, it’s time for a wearing of the green and we will do it on March 17, in the great celebration of a small Irish nation and its relatively obscure patron saint.

On St. Paddy’s Day, we are all Irish whether we are, in fact, African-American, Chinese-American, Italian-American or any other hyphenated American. We all watch the parades, maybe take a drink or two and wear some green, from a hair ribbon to a whole suit.

As has become a modern tradition, the taoiseach — as the prime minister of Ireland is called — will visit the White House and lobby President Donald Trump.

The prime minister, Enda Kenny, heads Fine Gael, which is more conservative than Ireland’s other two parties. Kenny will, one supposes, present the customary bowl of shamrock and talk of the long history of Ireland and the United States. Ireland has always looked to the United States as kind of safety valve — a place where Irish immigrants could find safety and hope, particularly during and after the Potato Famine of 1845-49.

Kenny also will have a purpose: lobbying Trump on behalf of the 50,000 Irish who are in the United States illegally — “illegal aliens” in the lexicon of the administration.

But the Irish PM will eschew that term in favor of “undocumented immigrants.” He will want to invoke that long history of migration from Ireland to America. He might even point out that the “wearing of the green” was illegal during the Irish Rebellion against the British in 1798.

The language is as loaded in Ireland as it is here. The Irish like to refer to their paperless migrants to the United States as “undocumented” — suggesting a slight matter of language, rather than an implicit indictment of “illegal.”

By contrast, and several Irish commentators have pointed out, workers in Ireland who do not have papers to work or live are referred to by Irish politicians as “illegal aliens.”

The Irish intelligentsia and many Irish analysts say this is racist. That the unspoken message Kenny will convey to Trump is: Take it easy on the Irish undocumented, they are white and Christian. Not brown or Muslim. We are you.

The Irish Times columnist Fintan O’Toole rages against what he sees as the race preference, and points out that the Trump administration is loaded with those of Irish descent. O’Toole calls them the “enablers” of Trump’s immigration policy: They are advisers Steven Bannon and Kellyanne (nee Fitzgerald) Conway, press secretary Sean Spicer and homeland security secretary John Kelly — as was short-lived national security adviser Michael Flynn.

Another Irish journalist, Cillian Donnelly, makes the same points and fears that Kenny, who has said his mission is to speak up for the undocumented Irish in America, will become complicit in the Trump immigration stand and the deportation of “brown” migrants.

Trump himself has links to Ireland. He owns a huge golf course and hotel in Doonbeg, on County Clare’s Atlantic coast.

Ironically, there he is enmeshed in a dispute over building a seawall. It seems when it comes to Ireland, Trump believes in global warming and sea rise: He has tried to get permission to build a 1.7-mile-long wall to keep severe storms from flooding his resort.

Trump’s request to build the original masonry wall were turned down, and he is pushing for two more limited rock and steel structures. Environmentalists are opposing them, too. They maintain that these structures will not end the erosion, but rather will increase it with time, destroying the dunes. However, Trump is the largest local employer and his wall is supported locally.

If all this is enough to drive you to drink, St. Patrick’s Day is a good time to start. Slainte!