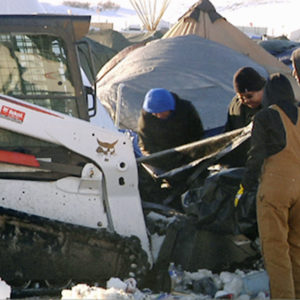 For the “water protectors” who spent the winter camped on the banks of the Missouri River in North Dakota, January brought disheartening news. Last week, President Donald Trump signed an executive order instructing relevant agencies to expedite the approval process of several infrastructure projects. Today, that order appears to have had the necessary effect: The Dakota Access Pipeline will receive the final easement necessary to finish construction.

According to press releases issued this morning by North Dakota Sen. John Hoeven and Rep. Kevin Cramer, the project has finally received the necessary easement from the Army Corps of Engineers. In a statement released by his office, Cramer said that he had “received word the Department of Defense is granting the easement for the Dakota Access Pipeline and Congressional notification is imminent.”

Hoeven also praised the decision, saying that, “Building new energy infrastructure with the latest safeguards and technology is the safest and most environmentally sound way to move energy from where it is produced to where people need it.”

The Corps itself has not issued a formal statement.

“To abandon the [Environmental Impact Statement] would amount to a wholly unexplained and arbitrary change based on the President’s personal views and, potentially, personal investments,” the tribe wrote. “Furthermore, the Army Corps lacks statutory authority to simply stop the preparation of the EIS and issue the easement.”

The protesters and the tribe argue that the environmental impact survey ordered on December 4, 2016 by Assistant Secretary of the Army Jo-Ellen Darcy cannot be ignored and must be completed before access can be granted.

While the protesters vow to remain, the Standing Rock tribe appears to want the camps themselves removed. For the past several weeks, the Standing Rock tribe has been pressuring protesters to move out of their riverside camps. The thousands of people who have lived for more than six months in tents and semi-permanent structures on the banks of the river have left behind dumpsters full of garbage and other debris.

On Tuesday, contractors hired by the tribe began to clean up the protest sites. Loaders, dump trucks, an excavator, and skid-steers moved into the Oceti Sakowin camp and began to tear down structures and abandoned dwellings. Articles deemed worthy of salvage were set aside for donation in Bismarck and on other reservations. Still, massive amounts of trash remain and spring floodwaters are coming.

“It is paramount for public safety, and to prevent an environmental disaster, that the camps be cleared prior to a potential spring flood,” Gov. Doug Burgum said in a statement on Monday. “Once the floodwaters recede, the land will need to be cleaned and eventually restored to pre-protest conditions.”

At present, cleanup efforts are focusing on removing the camps themselves. The cost of cleaning up the camps is yet to be determined.

The process has ironically shown how much the protesters themselves participated in the very disposable society they once criticized.

“I came here to fight for the environment. A lot of this stuff was donated and used once and now it’s garbage. It’s like the aftermath of a hurricane,” said Joe Britt, who came to help construct the camp and has remained to watch it taken down.

After the camps are vacated, the Army Corps is prepared to hire contractors of its own to complete the clean up. Some protesters would like to see a permanent camp built in the area to continue the feeling of spirituality and community they found at the protests. So far, the tribe itself has resisted these proposals.

While the fight against the pipeline is not complete, it seems that, long after summer’s end, camp is finally over.