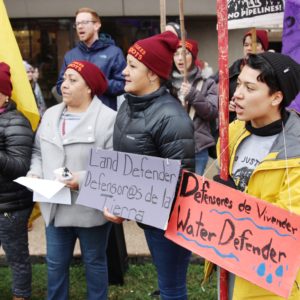 Environmental groups received a large boost on Wednesday, when the NoVo Foundation announced the recipients of $34 million in grants. The money was awarded to 19 organizations committed to doing “bold and transformative social justice work” in the U.S. and abroad. Winners include two groups with long-standing ties to pro-environmental and anti-pipeline movements: the Water Protector Legal Collective and Grassroots Global Justice Alliance, a group which includes the Indigenous Environmental Network (IEN), the Climate Justice Alliance, and the Right to the City Alliance.

“We launched the Radical Hope Fund as a radical experiment—can a time of increasing repression and darkness also serve as a springboard for deep collaboration and transformative change?” said Jennifer and Peter Buffett, NoVo’s co-presidents, who highlighted “feminist grassroots advocacy, activism, and organizing” as particular areas of focus.

The NoVo Foundation was created in 2006 by Peter and Jennifer Buffett, the son and daughter-in-law of Nebraska billionaire Warren Buffett. In 2016, it announced the start of a seven-year, 90-billion-dollar campaign to fight structural injustice facing young women of color across the United States. The work continued on earlier NoVo foundation projects, which worked to improve the lives of women and girls around the world. In 2017, the foundation launched the Radical Hope Fund, pledging to find new partnerships and to continue its social justice work.

“For us it’s about being able to build capacity at the local, tribal, regional level, where we have a lot of our member organizations and groups,” said Cindy Wiesner, national coordination for Grassroots Global Justice. “Part of the goal of this grant is to actually amplify and give us wider and greater capacity for folks, but also collaborative work and campaigns.”

The Indigenous Environmental Network was one of the groups behind publicizing the Standing Rock protests, though it has been around far longer. So far, the groups have had a limited impact, in part because they were constrained by their available resources. Now that they have the grant money, It Takes Roots is planning to expand its training, hosting events everywhere from New York to San Francisco.

This is only the start of its activist work, however. One of the key targets for the grant money is local groups. This initiative was reemphasized after the 2016 elections. Although the NoVo Foundation’s website does not directly mention President Donald Trump, it makes it clear that his election was a crucial turning point.

“The work of transforming our broken systems is more urgent than ever. In the United States, we are experiencing a continued breakdown of the fundamental pillars of democracy including independently functioning branches of government, rule of law, and a free press,” says the NoVo Foundation website.

With the $3.5 million it was awarded, the Grassroots Collective is furthering this mission with trainings in nonviolent direct action, tactics, “earth skills” and organizational projects that specifically target women. Although the names have changed, the grant means that groups associated with the Standing Rock protests have just come into a lot of money.

In addition to It Takes Roots, the NoVo Foundation is giving money to the Water Protector Legal Collective. Formed during the Standing Rock protests in 2016, the group began by serving as an on-the-ground legal team for protesters who had been arrested. After the camps were cleared, it has continued to serve as a group organizing protests and providing training to activists.