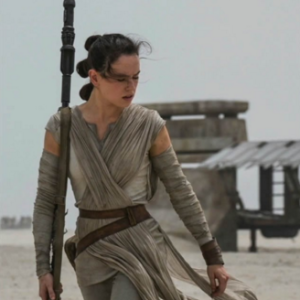 Daisy Ridley as "Rey" in Star Wars: The Force Awakens
[IS] Opinions

Star Wars and the Evolution of Strong Female Characters

In the documentary about the making of Star Wars, the venerable Walter Cronkite lauded the first movie for lifting the United States out of our “depression of the 70s,” the mood induced by the trauma of Vietnam and the skullduggery of Watergate. We were ready to believe in heroes again, and to affirm an intergalactic morality tale wrapped in dazzling special effects. Since we knew not our preternatural need for Star Wars, it hit us with the force of The Force.

We can’t reasonably expect J.J. Abrams to deliver the same kind of experience that George Lucas did back then, nailing the zeitgeist with a product we couldn’t ask for because we didn’t know we needed it. We have asked and asked; finally he’s delivered an engaging flick. But – spoiler alert – he has also created a female character that couldn’t be more in tune with the times. My benchmark: my 10-year-old daughter.

Natalie Portman’s Padme Amidala opened my eyes to how strong women frequently end up in Hollywood movies: portrayed within the confines of a traditional role (in this case, fussy royalty in fussy dresses) and then, dead. When she showed up for a fight in a skin-tight white suit, and then had her midriff exposed by the sharp claws of a flailing monster, I laughed out loud in the theater.

Still, the Star Wars franchise gave us more persuasive female badasses, the most obvious being Leia, who used a blaster, mercilessly razzed her rescuers and came out of the imperial torture chamber in a lot better shape than does her frequent foil, Han Solo. She’s not quite Katniss Everdeen, whom Hollywood allows to grow into her role as an emotional and physical toughie, but crossing Leia is generally a bad idea. Just ask Jabba the Hutt.

Rey, the standout of Star Wars: The Force Awakens, is a character who happens to be a women rather than being a woman who’s in the script to demonstrate empowerment. My daughter, Lucinda, twigged to this intuitively.

Bursting through the door at home and bubbling about the new movie, Lucinda launched into a monologue about Rey, rattling off the character’s assorted attributes and accomplishments – fights with a staff, flies the Millennium Falcon, has Jedi power — to my bemused wife. After a few run-on sentences, Lucinda caught a breath and said: “She’s a girl,” when she realized my wife hadn’t seen the movie. But the tone was not, “She’s a girl and so am I.” Rather: “You might think it’s ‘Ray,’ I’d better clarify.”

For dense theatergoers, Abrams includes an early action sequence that fences Rey off from the damsel-in-distress trope that often emerges when things start blowing up. She dispatches a few bad guys with her staff, to the amazement of Finn, the turncoat Storm Trooper who needs more rescuing than Rey. “I know how to run without you holding my hand,” she tells Finn.

In another moment, Rey works under the hood of the Millennium Falcon, parts flying everywhere while she barks out orders to Finn about what tools she needs to get it moving again. It’s a bit like Leia lecturing Han back in the day, except that Finn is too overwhelmed by the situation to zing Rey back the way Han would have. Leia was asserting her authority. Rey is the only plausible leader on hand.

At one point, when the Falcon almost comes loose at the seams, Rey roots around under a control panel and the ship suddenly stabilizes, to the amazement of Han Solo. Dangling a wire from between her fingers, Rey exults: “I bypassed the condenser!” Any science teacher these days would have recognized the look on Rey’s face at that moment. The student knows the theory, but the delight comes when the experiment pans out in practice as well.

Rey will resonate with girls not because they aspire to be her, but because they are already. When Lucinda whips out a sword, it’s to be a musketeer for Halloween. When Lucinda gets her hands on the iPhone to shoot video, she’s the movie’s director, calling the shots. When Lucinda executes an art project, it’s her vision being realized.

The Force Awakens didn’t create the first strong female character, but the movie did — and presumably will some more — let Rey’s arc take shape in a way that other Star Wars women didn’t experience. This evolution has been a delight to watch, from Leia, to Katniss, to Rey. And, of course, Lucinda.