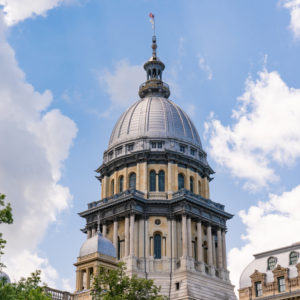 Dome of the Illinois State Capital Building in Springfield, Illinois
[IS] Opinions

State Bankruptcy Is Harsh, but Might Help Some Workers

In a recent radio interview, Senate Majority Leader Mitch McConnell suggested that instead of federal bailouts to help fund states’ employee pensions — which are even more stressed than usual due to the economic damage wrought by COVID-19 — Congress should give states the option of declaring bankruptcy.

It’s a hardline stance, and bankruptcy is not something to take lightly. Still, we shouldn’t dismiss the idea offhand as merely an alternative to bailouts, or as some kind of punishment for fiscal troublemakers.

In some specific cases, it may open the door for reforms that help balance the concerns of taxpayers, the need to pay government workers what they’ve been promised and our ability to give future workers a comfortable retirement.

First, consider the nearly impossible situation. Due to recent stock market declines, state pension plans have lost billions. Total pension debt, which was $1.2 trillion at the beginning of 2020, is expected to increase to between $1.5 trillion and $2 trillion by the end of this year.

Most state and local governments use “defined-benefit” pension plans that promise workers a set amount of retirement income. These include some risk that the employer and employee contributions, plus the investment returns they generate, will not be enough to cover costs many years later as workers retire.

Some governments have added to the risk by contributing too little, which they balance by making unrealistically optimistic assumptions about the investment returns.

When the true numbers eventually come to light, they reveal pension funds that are deep underwater. Almost every state and local government pension plan is underfunded, and several states have plans that are less than 50 percent funded.

In response to broken pensions and the effects of the pandemic on state budgets, officials from Illinois and New Jersey have asked for federal assistance. Leaders know that otherwise, they will one day face painful alternatives like significantly raising taxes or severely cutting spending on other government services so they can pay those pensions.

Of course, states are only in this predicament because past governors and legislators promised workers generous benefits without setting enough funding aside. It’s a tricky question: Should the federal government disproportionally bail out the states whose leaders behaved the most recklessly?

Absent a bailout, a number of states have taken steps to reform their pension plans. However, it’s difficult to devise reforms that would make pensions solvent in the most-underfunded states without drastically reducing what they promise to workers.

The fairest solution in these cases would be for states to pay out the retirement benefits they’ve promised for all work that’s been completed, while revisiting the benefits for future work. However, some courts forbid any benefit reductions to existing workers — even for work they have not performed yet.

Thus, states are increasingly likely to do something else: offer far less in pay and retirement benefits to workers who have not been hired yet, while continuing to credit generous pension benefits to existing workers for the remainder of their careers.

That brings us back to bankruptcy, which can be seen as a tool to allow states to restructure their pension obligations. Instead of risking default or imposing drastic cuts on only the youngest and newest workers, states could use the restructuring permitted by bankruptcy to reduce their commitments to pay pensions on all future work.

This would leave them with more money to pay pensions already owed, spread benefit cuts among all workers, and reduce future benefits to a fair and sustainable level that taxpayers can afford.

Bankruptcy would not be right for every state or situation, and we should think carefully about what other consequences it might bring. It could add uncertainty to the market for state government bonds, raising borrowing costs for all states. And if a state declared bankruptcy, it could contribute to panic in already-stressed financial markets.

But let’s also remember that it’s about more than avoiding a federal government bailout of state pension plans. If bankruptcy were to give states the option to fix what has so far been politically impossible to fix, then let’s at least have the conversation.