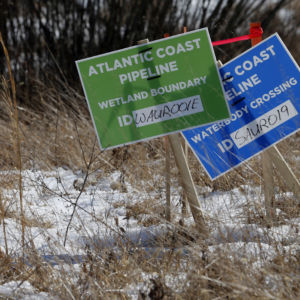 The start of President Donald Trump’s administration looked promising for energy infrastructure construction, as the new administration wasted little time granting approval for the Dakota Access and Keystone XL pipelines. The two projects had languished for months to years under the Obama administration as environmentalists questioned their impact on water quality. While the Trump administration has made infrastructure improvement a focus of the first term, construction of pipelines in Virginia, New York, and Louisiana continues to be held up because of permitting questions.

In Virginia, Dominion Energy is uncertain if construction can continue after a federal appeals court invalidated a required environmental permit. In a letter on Tuesday, the company told the Federal Energy Regulatory Commission (FERC) that it planned to avoid construction work on sections of the project totaling 21 miles in West Virginia and 79 miles in Virginia.

The court’s ruling found that the U.S. Fish and Wildlife Service had set inadequate limits for the impact of construction on endangered or threatened species.

“The limits set by the agency are so indeterminate that they undermine . . . the enforcement and monitoring function under the Endangered Species Act,” the judges wrote in their decision.

What this ruling means, however, is still being argued. Environmentalist groups, including the Southern Environmental Law Center and other litigants, contend that the court’s decision means that work must stop on the entire project. Dominion says that it will rework the necessary sections, but wants to continue working on other sections of the project.

At present, the decision lies with FERC, which asked the company to file details of the areas it plans to avoid and its plans to mitigate the environmental impacts of construction. Even without the court order, another lingering hiccup remains: the possibility of additional review by the State Water Control Board.

Last year, Virginia’s Department of Environmental Quality decided to cede its review authority to the Army Corps of Engineers. Under the decision, primary review authority for hundreds of crossings of small streams and other state waterways for both the Atlantic Coast and Mountain Valley pipelines, would rest with the Corps. Now, citing concerns that the federal agency review was inadequate to protect Virginia’s environment, Virginia officials are soliciting comments on the permitting process. The 30-day comment period began in mid April.

Industry groups are concerned about the impact this regulatory uncertainty could have on construction projects. A coalition of more than 25 trade organizations and labor unions sent a letter to Gov. Ralph Northam (D) on Thursday, arguing that reassessment of previous permitting decisions would threaten jobs in the state.

“A policy enabling retroactive rescission of carefully considered and duly issued federal permits will call into question the force and effect of any Nationwide 12 permit for any Virginia construction project involving water crossings, including roads, bridges, electric transmission lines or virtually any form of infrastructure,” the letter said.

“This will undermine the reliability and certainty of duly issued construction permits in the State, impair private investment in much‐needed infrastructure projects and damage the State of Virginia’s reputation as a good place to do business.”

Uncertainty about the the permanence of permits is a growing concern as state offices continue to step in to try to halt projects they disapprove of. A key underlying concern is whether states can revoke water quality permits for pipeline projects that have already received federal approval. In New York, state environmental regulators have successfully stymied the Constitution pipeline.

As with the Atlantic Coast pipeline, the Constitution pipeline had been approved by FERC and officials hoped to begin construction this year. State officials in New York declined to issue a necessary permit, however, claiming that the company had not demonstrated that there were no safer methods of transporting the natural gas.

The company has opted to refile its request with FERC in hopes of being able to eventually start construction. This puts the project in an uncertain legal limbo, since it still does not know how state officials would react to FERC approval.

Permitting questions have also held up construction on the Bayou Bridge pipeline in Louisiana. For more than a year, various liberal groups had raised concerns about the potential water quality impacts of the pipeline. Unlike in New York and Virginia, here the state supports construction continuing, but faces resistance in the courts.

In a decision made public at the beginning of the month, a state district court judge in St. James Parish ruled that the Louisiana Department of Natural Resources (DNR) had violated state law in issuing a coastal use permit for the pipeline. According to the decision, the state agency had elimiated required environmental and safety protections for areas the pipeline would pass through. The judge ordered the DNR to require the pipeline company to develop emergency evacuation and response plans for these areas before construction could continue.

On Tuesday, the DNR appealed the ruling, arguing that it had not violated state law when issuing the permits. One reason behind the appeal is that it would allow construction to continue. Under state law, the previously-granted permit stands until the DNR either decides not to appeal or the window for filing closes in mid-June. Filing an appeal would also prevent the stop work order from taking effect until the case is closed.

In the meantime, protesters and pipeline workers are racing against the clock. Protesters responded to the decision by blocking construction on Thursday morning. Two people were arrested and charged with trespassing. The pipeline company explains that all work is proceeding in accordance with the permits and disputes the characterization that work continued late at night.

The federal government may nominally retain final permitting authority over pipeline construction. However, at present, state level resistance is complicating efforts to get infrastructure projects underway.