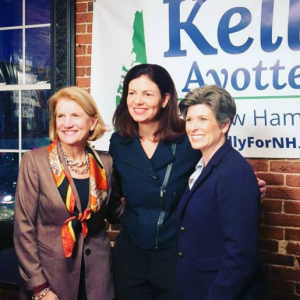 Editor’s Note: For another viewpoint, see: State of the Parties, Two Perspectives: Democratic: For Clinton, the Fuel Feeding the Sanders Candidacy Won’t Just Go Away

Donald Trump can thank a broad base of support for his decisive victory in his home state of New York. In other primaries, Trump has struggled to earn a majority of women’s votes, but in New York state, 59 percent of Republican women backed him.

This does not mean, however, that Trump is suddenly popular with women everywhere. Seven-in-10 women across the country still have an unfavorable opinion of him. Trump and other GOP candidates need to craft a better strategy to broaden their appeal, especially to the fairer sex. They can do this by embracing a strong pro-woman agenda.

Republicans will need to make women a campaign priority, no matter who clinches the Democratic nomination. Despite watching Bernie Sanders slowly close her once double-digit national lead among women, Hillary Clinton’s New York primary victory was largely due to solid support from women and minority voters, a win that makes her nomination more likely.

Democrats traditionally have an advantage with women voters in the general election, in part because they consistently demonstrate concern about the workplace issues women care about. They advocate for “pay equity” and support proposals such as mandated paid family leave and increased minimum wages in the name of helping women.

Sadly, these one-size-fits-all regulations can ultimately hurt the very women they are intended to help, by making our workplaces less flexible and job opportunities scarcer.

Republicans need to engage on these issues. They can start by correcting some of the biggest myths promoted by the Left. “Pay equity” is a largely misunderstood issue, thanks to the infamous wage gap figure, which shows women earn only 79 percent of men’s earnings. This figure compares averages; it doesn’t compare men and women in the same job with the same qualifications. As a Department of Labor report found in 2009, “The raw wage gap should not be used as the basis to justify corrective action. Indeed, there may be nothing to correct.”

That doesn’t stop Clinton and others Democrats from backing harmful legislation like the Paycheck Fairness Act that would pile red tape on employers and increase the legal exposure they face when they hire and advance women workers. That’s certainly not good for women’s earnings prospects.

Paid leave mandates are another popular, but misguided, plank of the Democrats’ economic agenda. Most full-time working women already enjoy some kind of paid leave benefit. But in cases where employers do not offer these benefits today, a mandate may do more harm than good. Employers will respond by offering fewer jobs, reducing take-home pay, or favoring male workers who are less likely to take advantage of the mandated paid leave.

Many Republicans are often caught off-guard when asked about the issues of pay equity or paid family leave. Their generic solutions, such as “economic growth” or “deregulation,” may not seem to offer particular benefit to working women. They need to prepare to take these issues head on and make a positive case for how conservative economic principles can improve women’s lives.

The good news is that the Independent Women’s Forum just released “Working for Women,” that makes exactly this case. The 56-page report is filled with ideas to modernize tax and workplace laws to provide maximum flexibility and prosperity for all women.

Here’s one example: IWF proposes the creation of Personal Care Accounts, tax-free savings accounts that women could use to save for maternity leave.

Employers, workers and even pro-family non-profit organizations could make contributions to these accounts so more women could afford to spend time out of work with a new baby (without the unintended, costly effects of a paid leave mandate).

The report also highlights a variety of other tax, workplace and licensing reforms, and reforms to programs like Social Security that would primarily benefit women. It even takes on educational savings reforms and addresses high childcare costs.

Conservatives have a great case to make to women voters. There’s no need to pander or use gimmicky campaign ads. The best strategy for appealing to women is to champion an array of policy solutions that would create a more dynamic, innovative, and flexible work world, and make life more affordable for women and their families. The blue print is there; now candidates need to take that winning message to the voters.