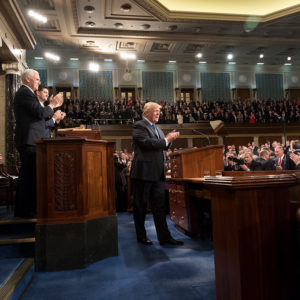 State of the Union and Health — Backward to Insurance, Forward to Care

The look backward triumphantly celebrated the end of the individual mandate of the Affordable Care Act. The mandate requires most Americans to either have health insurance or, if not, to pay a penalty/tax. In the president’s words:

“We eliminated an especially cruel tax that fell mostly on Americans making less than $50,000 a year, forcing them to pay tremendous penalties simply because they could not afford government-ordered health plans. … We repealed the core of disastrous Obamacare. The individual mandate is now gone.”

The president’s words rang out as partisan and divisive, as is the case with practically all discussion of health insurance. The decades-long furor over an individual mandate has perhaps been the bitterest chunk of that debate.

The president’s look forward was very different. It was about care, not financial intricacies of insurance, and the effect was neither partisan nor divisive nor triumphalist.

The second statement endorsed “right to try” — the notion that terminally ill people should have immediate access to potentially lifesaving drugs, even if the Food and Drug Administration has not approved them. As the president put it in his speech:

“We also believe that patients with terminal conditions should have access to experimental treatments that could potentially save their lives. … People who are terminally ill should not have to go from country to country to seek a cure — I want to give them a chance right here at home. It is time for the Congress to give these wonderful Americans the ‘right to try.’”

The film “Dallas Buyers Club” provides a compelling introduction to right to try. Matthew McConaughey portrays Ron Woodroof, a Texan who contracted AIDS in the 1980s. Upon diagnosis, he was advised that he had around a month to live.

Woodroof was aware of experimental drugs but was told that he could not try them because the FDA hadn’t determined whether they were safe or effective.

Given his dire straits, safety and efficacy were not Woodroof’s prime concerns. He crossed into Mexico, bought the drugs, and smuggled them back into the United States. His AIDS went into remission, and he made an industry of securing the drugs for other sufferers. Ultimately, his subterfuge gained him seven extra years of life.

Spurred on especially by the efforts of Arizona’s Goldwater Institute, around 38 states have passed right-to-try laws. And unlike the predictably partisan battle lines that coalesce around insurance issues, right to try has won support in the reddest of red states and the bluest of blue states.

However, state laws arguably constitute signal rather than substance, since federal laws largely override state actions. But in August 2017, the U.S. Senate approved right-to-try legislation by a startlingly bipartisan 94-1 vote.

The bill has lingered ever since in the House of Representatives, in part as a result of differences of opinion within health care officials within the Trump administration.

FDA Commissioner Scott Gottlieb has voiced concerns over certain aspects of the Senate bill. He and other critics worry that patients taking advantage of the law might lose important legal and safety protections.

Some wonder whether right to try would remove potential participants in more protracted clinical trials. But that raises the question of whether a grievously ill patient should be denied an immediate chance at life in order to fortify someone else’s experiment and data set.

Others have expressed concern that right to try might be a slippery slope. That once enacted, the right would gradually be extended to those who are gravely ill, but not terminally ill. And then perhaps to those whose illnesses are not all that grave. Others see such extensions as a positive good.

The ethics and economics surrounding right to try are daunting. But the controversies are far more elevated than the partisan, tribal divisions over the ACA and other insurance issues.

That, I believe, is a cause for hope.