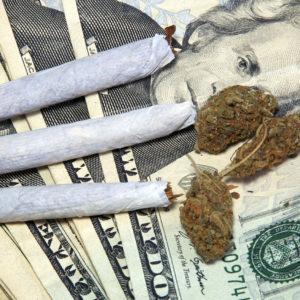 States, Localities Should Think Twice Before Getting a Cut of the Marijuana Rush

The country is going to pot. This centuries-old adage is fast becoming a reality as 10 states and D.C. since 2012 have approved the use of “recreational marijuana” among adults, if not decriminalized possession of small amounts, or awarded medicinal benefits to the drug.

Marijuana, or its technical and seemingly more palatable label “cannabis,” has shaken the Puritanesque propaganda, moved unwittingly toward normalization of its use, and is now getting a pass on true evidence-based medical treatment.

It is understandably unpopular to be against something that will help ameliorate or placate conditions or diseases that plague people, such as cancer, PTSD, Alzheimer’s, and AIDS. Hence, medical marijuana use enterprises are now used in 33 states and several territories, and more states will be joining them.

Its use, in several different forms, is now given tacit approval by our federal government that officially has it rated as a Class I drug with “no currently accepted medical use and a high potential for abuse.” Credible medical groups, organizations and expert panels are not convinced enough to exonerate the “evil weed,” let alone claim it can be an elixir.

Health effects research on  the use of cannabis, especially long term, has been challenging for several reasons such as who gets to handle the illegal substance, or how to expose individuals to the drug, especially minors. Surprisingly in our era of wanting “evidence-based medicine” to boost quality of care and holistic approaches to health promotion, we are letting cannabis join the regimen.

Suspected health problems with cannabis use are neurological, such as brain development, memory loss and IQ; respiratory; and compromising to fine and gross motor skills.

Understanding behavioral problems with its use is a classic association versus cause conundrum. However, strong associations have been found among teen use of marijuana with conduct, academic performance, “executive functions,” depression, mood disorders, and higher use of alcohol and other drugs. There is enough here to have medical authorities warn that a prudent approach to liberalizing cannabis is worth the delay.

The normalization of cannabis use is coming fast and furious. Beyond the understandable medical use, cannabis is quickly “coming to a theater near you,” with increasing dispensaries (with home delivery), expanded product mix, trainers, toting lounges and affinity gear.

The wacky weed utopia of mom and pop shops selling us stuff in our tie-dye shirts, and then we go walking around flipping others the peace sign is already passe. The cannabis trade will be an elaborate enterprise, and the drug will quickly become commoditized. It is being built by high rolling investors, influential lobbyists, real estate prospectors, specialty bankers, lawyers, and — most important — marketing experts with creative teams who will work to get into the heads of the many new consumers. This does not have the makings of a cottage industry but another oligopoly selling us stuff of questionable value.

Equally disconcerting is the revenue streams that state officials see from liberalizing the sale and use of cannabis. Before it becomes highly commoditized and prices decline, there is money to be made here, and state taxes are high on the list. However, the adage it takes money to make money holds true as several government departments (e.g. health, police, courts, revenue) will now have to devote time to, and new departments and commissions formed to, manage Big Marijuana. Add to the future the inevitable fight between what is government controlled and what is privatized as we ostensibly “control” the use of cannabis in our open society.

Furthermore the cannabis enterprise gains favor with social justice advocates who see job opportunities in neighborhoods, for the residents who are overly represented for arrests for its use. This smacks of another ironic move to seek reparations for an aggrieved group by exposing the group to more of the same.

The movement to liberalize marijuana across the states looks to be analogous to our building a national Jurassic Park. In the spirit of federalism, state policies should be progressive, thus serving as experimental grounds that could benefit other states’ or national policies. However, it seems foolish to run experiments for answers we intuitively know: “Don’t drink smoke.”