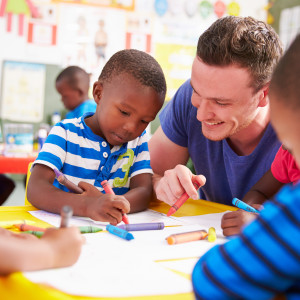 States Should Lead in Boosting Opportunities for Kids To Succeed

After dominating the news cycle for months, President Joe Biden’s Build Back Better (BBB) bill is finally dead. One of its key provisions was a plan for universal pre-K, a policy that resonated after two years of school disruptions and concerns about learning loss.

Ensuring that young kids get off to the best start possible is an important goal. But, fortunately, states need not rely on federal legislation to help prepare kids for success. In fact, the most effective solutions come from the state level, and as the recovery from the COVID-19 pandemic continues, now is the time for states to lead the way in setting up kids to succeed.

Although states may be tempted to create their own versions of a universal pre-K system, they should be skeptical. A new study published in the journal Developmental Psychology, which analyzed Tennessee’s state-funded pre-K program, found that participants’ initially positive achievement effects faded and non-participants were outperforming them on a host of academic and behavioral benchmarks. While there is some evidence that targeted and intensive early childhood education programs can help disadvantaged kids, the case for universal programs is much weaker.

Instead, states should focus on policies that nurture the development of “soft skills”—skills that enable people to effectively navigate their environment, work well with others, perform optimally, and achieve their goals. A growing consensus of economists has identified these skills as the key building blocks that enable cooperation and self-regulation, allowing kids to work well with others and succeed both early and later in life. Understanding both the shortcomings of universal pre-K programs and the significance of developing soft skills at an early age, state policymakers should look to solutions that are more likely to help kids gain these essential skills.

Some states are already taking action. Although rates of violent crime have declined dramatically over the past several decades and incidences of child abduction remain vanishingly low, local law enforcement often penalizes parents for giving their kids freedom to play on their own. Yet “free play” helps kids develop the soft skills that are so critical for success, such as learning how to work effectively with others and solve problems without adult interference. To that end, Oklahoma, Nevada, and Texas have followed Utah’s example in passing “Reasonable Childhood Independence” bills that ensure parents can “let their kids walk and play outside, stay home alone, and engage in other normal childhood activities without being accused of abuse or neglect.”

Giving parents such legal flexibility and peace of mind is one way for states to take soft skills seriously. Developing these skills goes far beyond just cultivating helpful playground manners. A wide body of economic research suggests soft skill development is becoming increasingly important in the modern labor market, even outweighing the importance of cognitive or “hard skills.” At a time when software and automation are encroaching on a growing number of traditional occupations, creativity and teamwork cultivated from an early age become even more important—and lucrative. All states should ensure that parents have the freedom to allow their kids to learn, play, and grow.

Another area where states have the opportunity to help kids succeed is by reforming state welfare programs that penalize marriage and discourage the formation of families, in which kids have the benefit of growing up in a home with two married parents. Not only is this environment shown to be maximally beneficial for the economic outcomes of kids in the long run, but it’s also associated with a higher likelihood of avoiding child poverty and contact with the criminal justice system.

Regrettably, the structure of certain state-level welfare programs, such as childcare assistance programs, is set up in a way that would disqualify recipients from receiving benefits if they were to get married. This is not just a problem on paper either: Focus groups with working-class Americans have identified exactly these concerns as a reason why participants choose not to marry. Altering these programs to account for the income of two-earner households, just as the tax code does, would be an effective way to end these penalties and stop discouraging family formation. Moreover, rather than losing benefits all at once after a certain income threshold is exceeded, benefits should taper off as income increases.

With federal solutions either stalled or misdirected, states must once again lead the way. Boosting the opportunities for kids to learn important skills from an early age is one of the best ways to increase upward social mobility and provide every child with the best opportunity to succeed.

State policymakers understand best what works or what doesn’t, and they can see a blueprint for increasing opportunity. The only question now is how many will seize it.

Ben Wilterdink is director of programs at the Archbridge Institute, a Washington-based think tank focused on economic mobility. He wrote this for InsideSources.com.