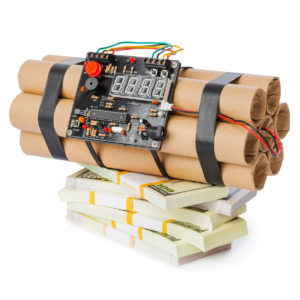 That’s the sound of a bomb nearing explosion, one with the power to destroy taxpayers’ lives and state budgets. This explosive device is set to blow up sometime in the future, but it’s just as dangerous and deserving of our attention as any immediate threat.

For decades, state lawmakers across the nation have been cooking the books and using budgeting gimmicks to defer bills coming due and enable spending binges, adding incendiaries to a metaphorical pile of dynamite. With every additional unfunded liability created by politicians, the fuse on this bomb grows shorter, and the potential risk to all Americans increases.

If policymakers don’t solve the budgeting problem they’ve collectively created and stop the madness, the financial explosion may result in total devastation of the U.S. economy.

Unfortunately, 40 states cannot pay their bills, according to the ninth edition of Truth in Accounting’s The Financial State of the States. In fact, state governments have racked up more than $1.5 trillion in total unfunded state debt.

This debt metastasis, primarily driven by the rampant mismanagement of government pension plans, threatens to obliterate state budgets. Necessary pension-fund reforms, such as shifting from defined-benefit programs to 401(k)-like defined-contribution plans, have garnered a fierce resistance that has sped up the clock for the debt doomsday.

“States in general do not have enough money to pay all of their bills,” the report states. “Based on our latest analysis, the total unfunded debt among the 50 states increased by $53.4 billion to more than $1.5 trillion in (fiscal year) 2017. Most of this debt comes from unfunded retiree benefit promises, such as pension and retiree health care debt. This year, pension debt accounts for $837.5 billion, and other post-employment benefits — mainly retiree health care liabilities — totaled $663.1 billion.”

Fortunately, some state leaders have made decisions to shelter their voters from the coming debtpocalypse. For example, North Dakota lawmakers have made difficult spending decisions to ensure the state can meet its budget obligations. The Peace Garden State has $14.5 billion on hand to pay $7.4 billion in liabilities, creating a comfortable cushion for potential economic downturns.

Despite the state’s seemingly stable financial footing, there’s still room for improvement: North Dakota’s pension liabilities are underreported by about $400 million due to budgeting gimmicks and outdated numbers.

On the other hand, states such as New York are likely heading into budgetary oblivion. Poor financial decisions have left the Empire State with a $143 billion shortfall, primarily caused by excessively generous pension benefits and no constitutional recourse for lawmakers seeking to undo the fiscal damage wrought by their predecessors. All in all, New York has only $135 billion in assets available to pay for $277.9 billion of future liabilities.

The time to solve this problem, for every lawmaker in every state, is now — not tomorrow, not next week, and certainly not some unspecified day after the next campaign.

The clock is ticking, and how state lawmakers choose to prepare for this inevitable explosion is up to them. Refusal to acknowledge the problem is a gross abuse of the trust voters put in their elected officials.