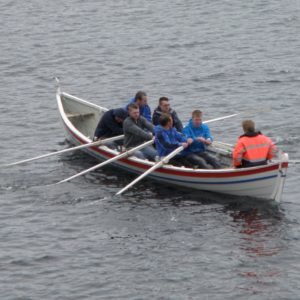 Each year around this time, with the confluence of two great events on the calendar in July — Independence Day and my birthday — I like to reflect on the America I have known for well past a half century.

This year I see the United States as a great rowboat with some loud and some loony crew members rocking the boat from right to left and left to right. Social media is both the sponsor of this rowing exhibition and a coxswain whose amplifying megaphone drowns out much of what passes for thoughtful, civil discourse among passengers.

For perspective on the political actors rocking the boat, I’m aware that one can rummage through old newspaper archives to find similar narratives, accusing President Washington, for example, of being “the man who has entailed upon his country deep and incurable public evils.”

Personally, I miss Eisenhower. Like many from his mid-century constituency, I had a badge that said, “I like Ike.” He was a great stable force who won a war for the world and then led us to eight years of prosperity.

Maybe this boat-buffeting buffoonery started in the 1920s when the Bard of Baltimore, H.L. Mencken — whose political stripe is still unknown — observed that our “elevation of politics to the plane of undiluted comedy is peculiarly American, that nowhere else on this disreputable ball has the art of sham-battle been developed to such fineness.”

A modern-day Mencken calculation based on the salaries of the president and members of Congress reveals that my entertainment cost for the executive and legislative arms is 53 cents per year, whereas HBO is $180.

As Mencken said of our politicians, once “the old false assumption of their integrity and public usefulness was quietly abandoned and a new more accurate assumption of their roguery was adopted in its place… there was a measurable increase, I believe, in the public happiness.” If only that were true today.

While we bunker away below deck and politicians accuse each other of mismanaging a pandemic where expert models were contradictory and wildly in error, some citizens find gratification in competing with politicians for inanity.

They are not to be taken too seriously, for as Mencken said, we didn’t come here as “the superior men of their native lands, but the botched and the unfit.”

In the midst of the pandemic, the nation has responded to a truly horrible crime, which calls for an immediate and targeted fix. Unfortunately, even faddish citizens of toney towns genuflect in empathy as though it were a remedy.

Some, particularly the young, believe our civilization is on the verge to collapse. But for most of us, particularly those who have been around a wee bit longer and have found our sea legs, these are these just the ordinary vicissitudes of American life rocking us to and fro.

We’re not sinking into the abyss. Such an outlook — called worst-case-scenario bias — has been identified as false thinking in behavioral economics. It confuses small deviations from normality as leading to catastrophe.

That brings me back to Independence Day.

While the Portland, Oregon, police twice declared a riot on July 4th; 1,000 miles south, a drone observed thousands of fireworks going off all over Los Angeles in a riotous celebration.

So, even in La La Land, as Mencken would say, we “remain on the dock, wrapped in the flag, when the Young Intellectuals set sail… contentedly and even smugly basking beneath the Stars and Stripes.”

While the boat lurches left and right, most of us still row forward.

Farmers farm, salespeople sell, inventors invent, bureaucrats regulate, teachers teach (over the internet), and manufacturers manufacture. These are the occupations that, even when we temporarily veer off course or pull away from our guiding star, keep us on our celestial azimuth.

As long as we can correct course every once in a while, steering clear of the nonsense penned by overly partisan pundits and echoed by social media, we can content ourselves with the deep conviction that we are still, indeed, a great country— and will remain so.