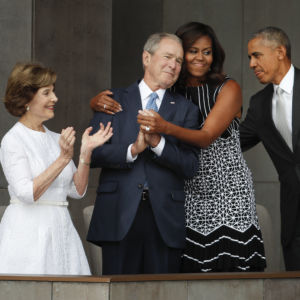 Whether by way of “Saturday Night Live,” the Screen Actors Guild Awards, or the “style stakes” of global summits, society has a lot to say about first ladies. From their visibility to their silence, their public stature to their panache, women in this distinct position are subject to a non-stop stream of intrigue, expectation and assessment.

As a culture, we assume first ladies will manage precedents and public opinion within a very narrow margin of error. And that needs to change, especially as the role of first ladies is one without a rulebook. For example, Melania Trump felt compelled to address her critics at a recent White House summit she hosted on cyberbullying and internet safety.

In stark contrast, whether looking to Dennis Thatcher, Sindre Finnes or Nicholas Robinson, first gentlemen have largely escaped the enduring critique of their female counterparts. Outside of the tongue-in-cheek coverage of Philip May’s suit selection in his first appearance at 10 Downing Street, or Gauthier Destenay’s attendance at the G-20 spouses’ event, it is difficult to recall any notice of the designer preferences and shoe choices of male first spouses. Or commentary citing words like “frumpy,” “baby mama,” and “desperate G-20 summit (spouses),” to name a few.

Moreover, in lieu of their careers, how many first gentlemen have taken on regular campaign appearances and public engagements? Or received criticism for either exceeding or evading an ever-moving spectrum of responsibility and expectation?

When Michelle Obama opted out of accompanying her husband to Japan in 2014 due to existing commitments, her absence was described by some as a snub.  A Japanese politician even went so far as to promote an outrageous and unfounded claim that her nonappearance was due to impending divorce. A year later when she visited the country with her daughters in support of the global education initiative Let Girls Learn, the visit was highlighted in the press as “a diplomatic-patching-up, a spring break-smoothing of ties, a placating-vacation.”

In comparison, Joachim Sauer was “hunkered down” in his chemistry laboratory when his wife, German Chancellor Angela Merkel, made history in 2005 at her first inauguration. His initial “public” appearance occurring eight months after the election with little attention from others.

Pat Nixon cited her time as first lady as “the hardest unpaid job in the world.” And as Hillary Clinton reportedly described her experience in the East Wing, “Who I really am as a person is ultimately less important to the public than what they want me to represent as a persona.”

Not only should we stop the archaic practice of scrutinizing first ladies — and women — by their appearances and the actions of their husbands, we should also recognize there is no one-size-fits-all approach to this position. The role of a first lady is whatever she wants it to be. As Betty Ford rightly pointed out while advocating on behalf of the Equal Rights Amendment, “Why should my husband’s job or yours prevent us from being ourselves?”

Some of the greatest influences on the role of first lady are the individual personalities, experiences and interests of the women within the position, as documented across the Bush Institute’s report, “A Role Without a Rulebook: The Influence and Leadership of Global First Ladies.”

Likewise, their partnership and advice behind the scenes can also aid diplomacy and political outcomes. For example, Clementine Churchill had considerable influence on Sir Winston Churchill’s leadership and career throughout their marriage.

In an age where gender equality is increasingly given the attention it deserves, our culture must move beyond superficial assumptions and do a better job of acknowledging the notable ways in which first ladies have changed history for the better. At the same time, we need to also grant all political spouses the autonomy to define their own approach.