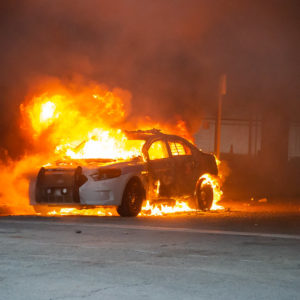 Stop the Mobs; Start the Discussions

Public officials have the responsibility to protect America from rampaging mobs that seek to destroy monuments and demoralize Americans.

The destruction is a means to an end — a Marxist reshaping of America that has little to do with protecting the lives of innocents.

If it were only about protecting innocents, we could come to agreement on reforms in civil discussions.

A Yahoo News/YouGov survey found that 84 percent of Americans strongly or somewhat approved of the firing of the officers involved in George Floyd’s death. This would have been a good starting place for real cooperation on the subject of police brutality… if the radical Left wanted solutions.

Public officials must stand against lawless destruction and allow Americans the opportunity to engage in civil discussions as they continue the ongoing quest for the ideals in the Declaration of Independence and Constitution.

Politicians who think they can hide in their offices until this crisis blows over are making a monumental (no pun intended) mistake. When you give into mobs, you get more mobs. It is time to stand up.

America can handle a nuanced discussion about race. They can differentiate between an obviously true phrase, “Black lives matter,” and an organization by the same name that has questionable leadership and some goals that are not shared by most Americans, such as defunding the police. But such understanding requires true leadership — not politicians with talking points.

We need thoughtful leadership such as that of Evangelist Alveda King, niece of Martin Luther King, Jr., who recently stated: “While we are protecting our history, we are overcoming our biases; this is happening simultaneously. There is no need to vandalize property and real estate in this process. We must remember the good; that’s legacy. We must avoid repeating the bad; bad is sin. Remember, statues can be idols. As one blood, one human race; it’s time to return to God.”

America’s citizens are demanding that elected officials safeguard public and private monuments and buildings from rioters and leftist radicals who are inspired by self-professed “trained Marxists.”

The federal government has been spurred on by a recent Executive Order by President Trump, which instructs federal law enforcement to prosecute people who damage federal monuments, and threatens to withhold federal funding from state and local governments that fail to protect their own public monuments and statues.

The Department of Homeland Security took action to protect federal monuments over the July 4 holiday; however, many state and local officials have been cowardly and the result is lawlessness and violence in our streets.

Why private? Black Lives Matter member Sean King recently called for destruction of images of a “European Jesus” stating on twitter: “All murals and stained glass windows of white Jesus, and his European mother, and their white friends should also come down. They are a gross form white supremacy. Created as tools of oppression. Racist propaganda. They should all come down.”

We have no qualms about calling out cowardly politicians and officials who refuse to stand up for civil discourse over lawlessness.  “Just as we fight every day to protect the constitutional rights of all Americans. We will not sit idly while domestic terrorists, anarchists and thugs criminally destroy monuments and private property. We will call out any public official who allows lawlessness and destruction,” according to ACRU Policy Board Member Amb. J. Kenneth Blackwell.

Stop the mobs. Then start the discussions.

Lori Roman is President of the American Constitutional Rights Union. She wrote this for InsideSources.com.