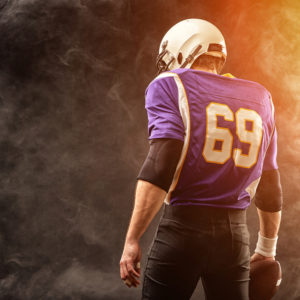 Point: Student-Athletes Are Workers. They Should Get Paid

Editor’s Note: For a different viewpoint, see Student-Athletes Are Workers; They Should Get Paid

California has fired the first shot in the fight against the unfair pay practices of the NCAA. The state’s new Fair Pay to Play Act, just signed by Governor Gavin Newsom, allows for college athletes to profit off their own name and likeness.

In other words, if you’re a college athlete in California, come January 2023, you can make money off things like the sale of jerseys with your name on them, as well as endorsements and autographs you give.

The NCAA, which currently bans student-athletes from receiving any compensation at all, is angry about the law. And every state should adopt it.

The bill, which passed with overwhelming support and enjoyed the backing of superstars like LeBron James, is a major step toward leveling the playing field (pardon the pun) with the NCAA, which rakes in more than a billion dollars in revenue from college sports.

The bulk of that money comes from television and marketing rights — which means that AT&T Halftime Show during March Madness, which shows all those player highlights, is bringing in the big bucks for the NCAA.

Coaches also hit the jackpot in this system: College football or basketball coaches were the highest-paid public employees in 39 states as of 2016. Meanwhile, stories of their players struggling to eat while working near-full work weeks are all too common.

NCAA rules dictate that these “student-athletes” are allowed to put only 20 hours a week toward their athletic careers. Yet the NCAA also put out a survey reporting that many of them work at least 30 hours a week, and often more than 40 hours, on their sport.

So, for all intents and purposes, these players are workers, breaking their backs for their bosses and employers to get rich.

NFL quarterback Tim Tebow, who supports the NCAA’s ban on paying players while raking in cash for itself, said that the push to pay student-athletes comes out of a “selfish culture, where it’s all about us.”

But when these athletes are significantly more likely to suffer chronic injuries long-term than non-college athletes — the CDC says there are around 201,000 injuries in college sports a year — who really is being selfish? The people risking their bodies, or the ones making money off that damage?

Only a small percentage of these young people risking life and limb even have a chance of making a professional career out of it.

According to the NCAA’s own breakdown, only 1.6 percent of football players go on to be drafted into major professional leagues. And for basketball players it’s even lower, with just 1.2 percent of men and 0.9 percent of women going pro.

So what good is this system? The NCAA and its defenders say it provides kids with an education, and that’s what the whole system is about: they’re students first, athletes second. They trot out stats that more than 80 percent of student-athletes end up getting a degree.

But with athletes working full work weeks to train — never mind actually competing — do their schools really care about their education? It’s no wonder story after story comes out about cheating scandals related to players trying to stay academically eligible.

Heck, the NCAA even acknowledges it doesn’t have a responsibility to ensure education quality.

In short, the NCAA runs a system where athletes destroy their bodies, often don’t get a quality education, and struggle to make ends meet, with little chance of going pro — all while the coaches and the NCAA executives make money hand over fist off their labor.

It’s a completely exploitative system, where these kids can’t even start a side business or win a car in a promotional contest without being punished.

So yes, college athletes should absolutely be paid. The California bill is a starting point, and an important one at that. Let’s expand it and allow every student-athlete to get paid, in every state and at every college.