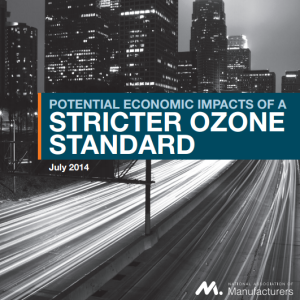 STUDY: EPA Planning the Most Expensive Regulation of All Time

A new economic study conducted by NERA Economic Consulting and commissioned by the National Association of Manufacturers (NAM) finds that a draft policy from the EPA for new ozone regulations could reduce U.S. GDP by $270 billion annually and add $2.2 trillion in compliance costs between 2017 and 2040.  This factors in nearly 3 million job losses, higher energy costs, reduced household consumption, and slowed economic development. All told, the study finds this would be the most costly regulation ever issued by the United States Government.

The study comes in response to a new rule expected to be released by the EPA in December that would reduce current ozone standards from the 2008 level of 75 parts per billion (ppb) to between 60-70 ppb. Current ozone levels are near those that occur naturally in the atmosphere.

Dr. David Harrison of NERA, who previously served as Senior Staff Economist on the President’s Council of Economic Advisors, explained the model on a conference call with members of the media. The model assumes the EPA implements the rule at 60 ppb. Harrison stated that virtually every sector of the economy would be affected by the rule. The model considers that some sectors of the economy would benefit, but households and many businesses would face substantially higher costs.

The study found that households, which are already expected to be squeezed by rising costs of living, will be confronted by $1,600 per year in additional costs as a result of the rule.

NAM President and CEO Jay Timmons pointed to the gradual comeback of U.S. manufacturing, largely thanks to affordable energy. He said the new standards could wipe out these gains.

In a statement to InsideSources, EPA spokeswoman Liz Purchia said: “EPA has not reviewed the NAM study. The agency has not yet proposed a rule as and is still reviewing the available technical information. Any economic analysis on a new standard would be premature at this point and not based actual agency actions. History has proven time and time again we can reduce pollution—and grow the economy at the same time. Over the past 40+ years, we’ve cut air pollution by more than 70 percent and in the same time GDP has tripled. EPA is on track to issue a proposal this December, which will be available for public comment and input.”

The Natural Resources Defense Council further panned NAM’s study, stating that U.S. ozone standards are out of date. Emily Davis, an attorney with NRDC, tells InsideSources, “The science shows that ozone pollution is linked to asthma, cardiovascular problems, and even death. And we can cut this dangerous pollution all while growing our nation’s economy – the 44 year history of the Clean Air Act has shown that since 1970 dangerous air pollution has been reduced by 68% while the economy has grown by over 200%. Despite what industry groups like NAM might tell you, the Clean Air Act has proved that we do not, and should not, have to choose between safe air and a healthy economy. It is imperative that EPA act to tighten its ozone standards.”

The prospect of the new ozone proposal goes against statements President Obama made in 2011 when the EPA was planning to issue standards that would have likely had a lower economic cost than the new proposal. At that time, Obama asked the EPA to abandon its plans because of his Administration’s efforts to “underscore the importance of reducing regulatory burdens and regulatory uncertainty.”

The current 75 ppb standard has still not been implemented at the state or local level. Critics argue that changing the standard now, prior to the 75 ppb level being met, only adds to the regulatory uncertainty Obama was aiming to reduce.

Perhaps even more problematic, say critics, is that the EPA lacks solutions for how the new standards can be met. While some expensive new technologies may help in the prescribed reductions, two-thirds of the ozone reductions must come from “unknown controls.” These additional cuts would likely need to come from shutting down power plants and factories, removing cars from the road, or even limiting off-road vehicles.

Earlier this week, Sen. David Vitter and Rep. Lamar Smith sent a letter to EPA Administrator Gina McCarthy. The letter notes that the EPA has focused on reducing emissions but has failed to study the potential economic harm inflicted by new mandates.

The new study from NERA will likely raise further concerns that the EPA is ignoring costs and other negative impacts as it pushes to implement new environmental standards.

The full study is available online and includes impact summaries for each state.