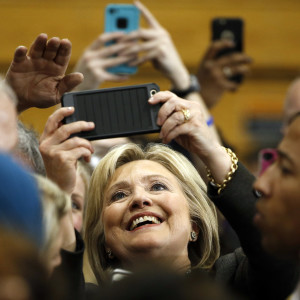 Though more political campaigns have a larger online presence than ever in 2016, voters have less opportunity than ever to interact with those campaigns, according to a study out Monday from the Pew Research Center.

As the campaigns of Republican Donald Trump and Democrat Hillary Clinton have demonstrated, social media is king in online campaigns in 2016, but the way each candidate approaches their sizable audiences on Twitter and Facebook are markedly different, with neither leaving room for a large degree of interactivity with voters.

Clinton’s campaign “has almost entirely bypassed the news media” according to the study, with 80 percent of the URLs in her Facebook posts linking back to campaign pages “which mimic the look and feel of a digital news publisher, but [are] oriented around original content produced in-house.”

While Sanders fell in the middle, none of the three offer comment sections on their websites or tools for creating individual fundraising pages — both popularly used in Pew’s 16-year timeline of online presidential campaigns. Also absent are opportunities for supporters to join voter constituency groups, which President Obama offered 18 of in 2012 and former Gov. Mitt Romney nine — still down from the 20 offered by Obama and Sen. John McCain in 2008.

Supporters options for interacting with 2016 campaigns on their websites are limited to donations, email updates and volunteer signups, with only Sanders offering scripts for those willing to take the initiative to make donation calls on their own.

Though the nature of social media is interactive, that nature has not emerged in presidential campaigns. During the three-week study in May there were almost no re-shares on Facebook of follower content by candidates, and only two of every ten tweets by candidates on Twitter were retweets.

Trump stands alone in this category with 78 percent of his retweets originating from members of the public, compared to 2 percent of Sanders’ and none of Clinton’s. Trump’s inclusion of the public in this regard tops even Obama’s in 2012 — considered along with 2008 the hallmark of digital grassroots campaigning — of 3 percent. None of Romney’s originated from the general public in 2012.

That doesn’t mean Trump is ahead or even on par with the digital tide. During an event in Cleveland Monday discussing the various candidates’ digital campaigns — less than two miles from the 2016 Republican National Convention — Deep Root Analytics’ Sara Fagen said Trump, who famously discounted analytics at the start of his campaign, has missed major opportunities that could make the 10 or 20,000-vote difference in key battleground states.

Fagen, who pioneered political micro-targeting during the 2004 Bush-Cheny reelection campaign, said candidates in the recent past have used major announcements like vice presidential picks as list-building opportunities, with Obama using text messaging to gather cell phone numbers in 2008 and Romney using it to encourage supporters to download the campaign app in 2012.

“Donald Trump did nothing,” Fagen said. “He sent out a tweet, but nothing to enhance his ability to re-communicate with people, which I think was a big mistake.”

Google senior counsel Lee Dunn, who worked on the McCain campaign in 2008, said 2016 will be remembered as the year of mobile and video, and that going forward, she expects campaigns will be investing heavily in data from analytics firms and targeting voters through both broad and individualized campaigns.

“YouTube has more people on its platform every day than those people who are watching ‘Dancing with the Stars’ and the Super Bowl combined,” Dunn said, adding that more users accessed the platform on smartphones than on desktop computers in 2016. “That’s just setting the world on fire.”