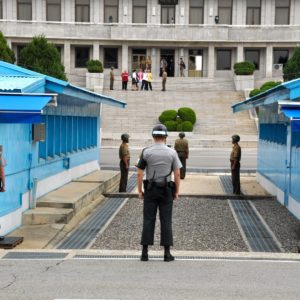 Why the Sudden Silence on Human Rights in N. Korea?

SEOUL  — Remember the “human rights” issue? Once upon a time, just about everyone was complaining about egregious human rights violations in North Korea.

Interestingly, you don’t hear a lot about that stuff any more. President Donald Trump is so busy patting himself on the back for having resolved the North Korean problem, which he happily notes all his predecessors failed to do, that he won’t go near it. Instead, he praises his new pal Kim Jong-un for having been so kind as to release 55 sets of remains that may or may not be among those of the 5,300 Americans missing from the Korean War.

A couple of issues here. Trump, eschewing mention of human rights violations in North Korea, is going right to bed with all the leftists and liberals, pro-northers and defenders of the faith of Kim, Kim’s father, Kim Jong-il and his grandfather, Kim Il-sung, to whom the North Korean human rights issue is taboo. The more rational among them acknowledge the issue but prefer to change the subject, blaming the United States for compelling the Kim dynasty to develop nukes and missiles in “self-defense.”

The more extreme, echoing North Korean rhetoric, say North Korea is not guilty of human rights violations at all and there’s no gulag system in which tens of thousands are imprisoned, tortured, worked to death or executed for the least opposition to the regime or maybe for just for having annoyed the wrong people.

South Korea’s President Moon Jae-in, in his zeal for rapprochement with North Korea, is also cooling it on human rights, not saying a thing about it for fear of offending the Kim regime. Why harp on human rights, a topic that is sure to invite a fusillade of angry commentaries in the North’s state media, while trying to open up rail traffic with the North, to bring about visits among fast-dying members of families divided by the Korean War, and maybe encourage commerce despite sanctions.

The Moon government’s worries about the issue, notes Lee Jung-hoon, Yonsei professor who served as ambassador for North Korean human rights under conservative governments, is such that no one’s been appointed to that position since Moon’s election. As far as Lee is concerned, overlooking the human rights issue is no minor matter. “Without improvement in human rights,” he told a forum at Hankuk University, you can’t expect resolution of other issues, including “denuclearization.”

Nor are the presidents of the United States and South Korea the only ones who prefer to downplay the North’s human rights record. Lee recalls, when he tried to get American celebrities to take an interest, maybe to stage a concert on behalf of victims of human rights abuses in North Korea, he got zero responses. “The international community is not actively engaged,” he lamented. In fact, if foreign celebrities considers the issue at all, it’s often to follow the lead of the pro-northers by blaming the United States for creating the problem, for failing to provide “security guarantees,” then for imposing sanctions.

It’s unlikely the transfer of 55 sets of remains to North Korea is going to do much aside from create the false impression that North Korea actually is complying with the brief statement signed by Trump and Kim at Singapore on June 12. Sure, point four did “commit” to return of remains, but that was hardly the reason for the summit. By making a fuss over remains, both Trump and Kim have obscured what should be plain to everyone: North Korea is not going to give up its nuclear and missile program.

That reality, however, does not mean that pressure for relaxation of tensions, for reconciliation, is misplaced. Nor should Trump reverse course again and revert to the hard line of last year when he threatened to rain “fire and fury” on the North. It does mean, however, we should have no illusions about North Korea’s compliance with the vision of the Moon-Kim summit of April 27 or the Trump-Kim summit of June 12.

Obviously, pressure on the North to comply with the spirit of these summits has to intensify while sanctions remain in place. It also means diplomats and negotiators should be asking hard questions about North Korea’s record on human rights regardless of the taboos of pro-northers or the certainty of North Korean outrage.