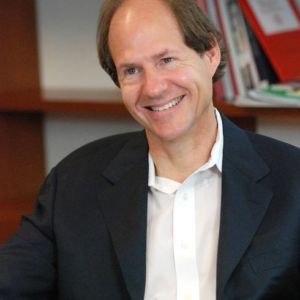 “That’s not a nudge,” Cass Sunstein says, gesturing to a screenshot of Kylo Ren running Han Solo through with his lightsaber. “I hope that’s not a spoiler.”

Sunstein, famously, is an expert on nudges. They’re behavioral science strategies aimed at changing people’s actions without restricting choices or employing intense incentives. He coauthored a book about them. But that’s not what he’s talking about today.

Today, the Harvard professor and former Obama administration regulatory czar is extrapolating from “The World According to Star Wars,” his latest and lightest text. His audience, at least at face value, is an unusual one: a room full of congressional staffers and policy wonks, gathered Friday afternoon in the Russell Senate Office building on Capitol Hill for a Third Way think tank talk.

Sunstein looks every bit the college teacher, giving a lecture accompanied by slides, but his goal here isn’t purely academic. He thinks Washington can learn lessons from his book, and he’ll be talking it up at the American Enterprise Institute and the Brookings Institution later this month. (He’s already hit two of D.C.’s most literary venues, Sixth & I and Politics and Prose.)

One conclusion drawn from “Star Wars” has to do with political persuasion. He argues that some of the most effective advocates for change frame their goals as reclaiming a lost past. Humans hate loss, so it’s no surprise that the Rebel Alliance is actually the Alliance to Restore the Republic. It’s about reclaiming historical freedom, not creating some new utopia.

Sunstein sees this in contemporary politics too. President Barack Obama, a Democrat, implies that American values will be lost if the country adopts policies that aren’t “who we are.” Meanwhile, presumptive Republican presidential nominee Donald Trump explicitly says the United States has lost its way with his slogan “Make America Great Again.”

Another “Star Wars” lesson the author brings in this polarized political climate is that there’s good and bad, light and dark, in everyone. (This recalls a teaching from another fantasy phenomenon of our time, “Harry Potter,” that “the world isn’t split into good people and Death Eaters.”) Sunstein talks about befriending Republicans during his Senate confirmation process, even if they voted against him.

Most discussion of Sunstein’s regulatory work is front-loaded at the top of his talk, primarily unrelated to his thoughts on “Star Wars.” Save the Solo-Ren reference and a memes played for comedy like “These Aren’t the Droids You’re Looking For,” this section is basically a quick overview of effective government nudging — automatic enrollment in savings accounts, simplified student loan application forms, etc.

InsideSources is curious to hear more about that, like why Sunstein deemed cost-benefit analysis “essential to the process” of regulation, but the author politely declines these questions, saying he’s focused on the galaxy far, far away.

“The benefits of ‘Star Wars’ greatly exceed the costs,” he says.