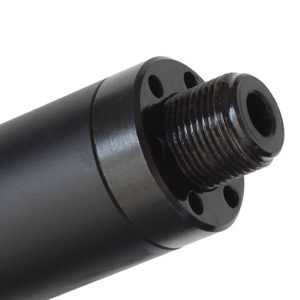 Cover your ears. You’re not going to want to hear this. Elected officials are attempting to set national firearms policy based on spy fiction movies instead of facts.

U.S. Senator Bob Menendez, D-New Jersey, introduced the Help Empower Americans to Respond (HEAR) Act, that would ban the sale, possession and confiscate firearm suppressors. Menendez said the tragic Virginia Beach murders spurred his ban proposal, claiming suppressors masked the sound of gunfire like what is commonly portrayed in James Bond movies. Menendez once again demonstrates his anti-gun agenda instead of pursuing policies that add to the public’s safety.

The murderer committed his crimes using two legally purchased firearms, only one of which was fitted with a legally purchased suppressor. Menendez referenced only a single handgun with a suppressor, overlooking police accounts of the other handgun. He also claims that unsuppressed firearms would have saved more lives by alerting more to the danger, but that contrasts with the account of Virginia Beach Police Chief James Cervera. He explained responding police officers followed the sound of gunfire to locate and eventually neutralize the murderer.

Menendez glosses over the fact that suppressors reduce the sound of a muzzle blast from a decibel level equal to a jet taking off to that of a jackhammer, not quite the nail gun to which he’s claiming similarities. He could have easily chosen to witness this for himself if he accepted the National Shooting Sports Foundation’s invitation to hear suppressors in the Capitol Police gun range two years ago. Conveniently, neither Menendez nor any of his staff responded to that invitation.

Suppressed gunfire is clearly audible and will gain the attention of anyone within the vicinity.

That’s not stopping Menendez from wanting to press on every American the restrictive gun control in his home state. Suppressors are legal to own in 42 states and to hunt within 40. More than 1.5 million suppressors are owned and operated for lawful purposes every day. Put simply, suppressors are a muffler for a gun. In fact, the same man who invented the car muffler, Hiram Maxim, invented and patented the first suppressors more than 100 years ago.

The senator is also ignoring that the Bureau of Alcohol, Tobacco, Firearms and Explosives considered recommending moving suppressor regulation from the 1934 National Firearms Act to the 1968 Gun Control Act because of the rarity in which they are used in crimes. From 1995 to 2005, less than 0.1 percent of homicides in federal court, an infinitesimally low 0.00006 percent of felonies in California and a mere 0.1 percent of armed robberies involved a suppressor.

The ATF noted in an unpublished 2017 paper that an average of just 44 cases involving suppressors per year over a 10-year period were recommended for prosecution. In fact, many of the European countries that Menendez looks to as an example of strict gun laws require the use of a suppressor and they are available over the counter in hardware stores in many countries. Those countries do this because they promote “good neighbor” policies for shooting ranges to reduce instances of noise complaints from neighboring communities.

Suppressors remain the most highly regulated firearms accessory. Buying a suppressor in the United States is a drawn-out and rigorous process. An individual buying one must submit fingerprints and a photograph, pay a $200 tax, inform the local chief law enforcement officer and submit a lengthy background check form to the ATF that can take as long as nine months or more to complete as more and more target shooters and hunters seek the hearing protection benefits of this accessory. Once that is done, the same individual must pass another background check before that person can take possession of the suppressor from a specially licensed retailer.

Menendez isn’t the only one pursuing suppressor restrictions. U.S. Congresswoman Jennifer Wexton, D-Virginia, introduced legislation that would allow a police chief or sheriff up to 90 days to arbitrarily and unilaterally decide if a suppressor sale should be completed. It would allow them to block the sale on subjective standards if that police chief or sheriff reasonably believes an individual poses harm to themselves or others. Wexton, however, doesn’t define “reasonably.”

This is a disturbing exploitation of a tragedy. Public safety would be better served if these elected officials provided real solutions for safer communities across America, instead of vilifying and attempting to deny law-abiding American citizens their rights.

Lawrence G. Keane is the senior vice president for government and public affairs and general counsel for the National Shooting Sports Foundation, the firearms industry trade association. He wrote this for InsideSources.com