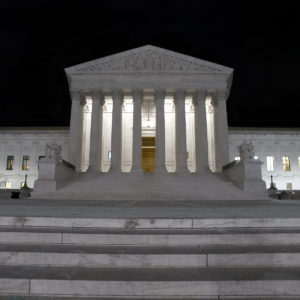 In a 5-3 decision on Monday penned by Justice Anthony M. Kennedy, the Supreme Court changed decades of law when it ruled that judges could investigate the comments jurors make during their deliberations to search for evidence of racial bias in criminal cases. The decision in Pena Rodriguez v. Colorado will likely blow a hole through the side of the jurisprudential barn.

At issue in Pena Rodriguez was whether a defendant’s conviction for sexual assault could be vacated and sent back for retrial because of racist comments a juror made during deliberations. One of the jurors, a former law enforcement officer, urged other jurors to find Pena-Rodriguez guilty “because he is Mexican and Mexican men take whatever they want.”

He also stated that where he used to patrol, “nine times out of 10 Mexican men were guilty of being aggressive toward women and young girls.”

The jury found him guilty of three misdemeanor charges. But two of the jurors later informed defense counsel of the racist remarks and suggested they may have influenced other jurors’ decisions. Pena Rodriguez argued that the juror’s racism violated his Sixth Amendment right to an impartial jury and asked for a new trial. The Supreme Court granted his request.

The majority held that when a juror makes a “clear (racist) statement,” courts can take the highly unusual step of going back and “impeaching” the juror’s deliberations. This entails calling the jurors back to the courthouse to ask them about their discussions during deliberations. And, where there is overt racial bias that casts serious doubts on the fairness of jury deliberations, the Sixth Amendment requires courts to investigate. When racial animus appears to be a “significant motivating factor” in the vote to convict, a new trial is warranted.

The dissent argued that while the majority was well intentioned, its decision subjects jurors to harassment from lawyers and threatens the finality of decisions. Eager lawyers, the dissenters argued, will now reach out to jurors after criminal cases and ask about racial bias in the jury. Indeed, the dissent suggested that unethical lawyers may even try to persuade jurors that race played a role in deliberations when it may not have. The dissent further argued the decision would throw the finality of the jury into doubt. Despite the jury’s verdict, the dispute will continue.

The question is: What effect will the court’s decision have among the lower courts?

It could have a minor effect. Defense lawyers already have tools to weed out jurors who harbor racial animus. They can question potential jurors during voire dire (when they are selecting the jurors); they can watch juror behavior during trial; and they can instruct jurors to notify the judge (before the jury reaches a verdict) when a juror makes racist remarks. It is hoped the number of racist remarks after these filters will be small — indeed, zero.

Additionally, the court sought to limit the impeachment of jury deliberations to claims of racial bias only. Commenting on the “unique” history of race in this country, presumably, the justices did not intend to allow the impeachment of the jury for other forms of bias.

It is more likely, though, that the decision will have a monumental effect on lower courts and criminal cases. Clever lawyers surely will test the boundaries of the court’s decision, raising challenges of jury biases over sex, sexual orientation, religion and other issues. It is likely future courts will investigate jury deliberations in these instances.

There is further wiggle room for lower courts. The rule announced by the majority says that courts will look only into claims of juror misconduct when the juror makes a “clear statement” involving racial animus. But just how “clear” the statement needs to be will surely vary across the circuits. The majority opinion also did not place a time limitation on when defendants could challenge their convictions. Months later? Years later? The circuits are likely to split on that issue as well.

It will take time to determine just how expansive the court’s decision is. In the hands of some judges, it is likely to be narrow. In the hands of others, it is likely to be broad. One thing that seems quite clear, though, is this: the circuits will split over how to interpret and apply the court’s decision. And so the court will revisit the issue in the future. This week’s decision was just the beginning of a new Sixth Amendment jurisprudence.

Ryan J. Owens is a professor of political science at the University of Wisconsin-Madison.