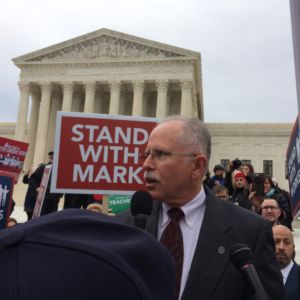 The U.S. Supreme Court was surrounded by demonstrators during a case Monday on whether to outlaw mandatory union dues in the public-sector.

Lead plaintiff Mark Janus argues in his legal challenge that mandatory union dues violate his constitutional rights. He argues that workers should have the right to choose whether they want to fund a union or not. Those opposed counter that unions are critical to protecting workers and upholding their rights and should be compensated for that.

The American Federation of State, County and Municipal Employees (AFSCME) is the specific union the lawsuit is challenging with the aim of setting a legal precedent that would impact all public-sector unions. Janus v. AFSCME Council 31 could very well become one of the most critical labor-related lawsuits in the country’s history.

Mark Janus addressed the crowd shortly after oral arguments. He was at the podium for less than a minute as hecklers shouted over him by chanting “shame” – in a likely reference to the hit fantasy series Game of Thrones. He thanked the crowd before leaving. Attorney Jacob Huebert took to the podium shortly after him when the heckling began to die down.

“We are pleased how everything went in the courtroom today,” Huebert, who is helping to represent Janus, said. “We remain very optimistic. This is the biggest case for worker rights in a generation, and we’re hopeful that the Supreme Court will restore a worker’s right to choose whether they want to give money to a political advocacy group like a union. And hopefully, the court will say clearly that when you get a government job, you don’t leave your rights at the door.”

Huebert works as the director of litigation at the Liberty Justice Center (LJC) – which has been providing legal assistance in the case alongside the National Right to Work Legal Defense Foundation (NRTW). The groups are hoping the court overrules a decades-old decision that has upheld mandatory union payments. 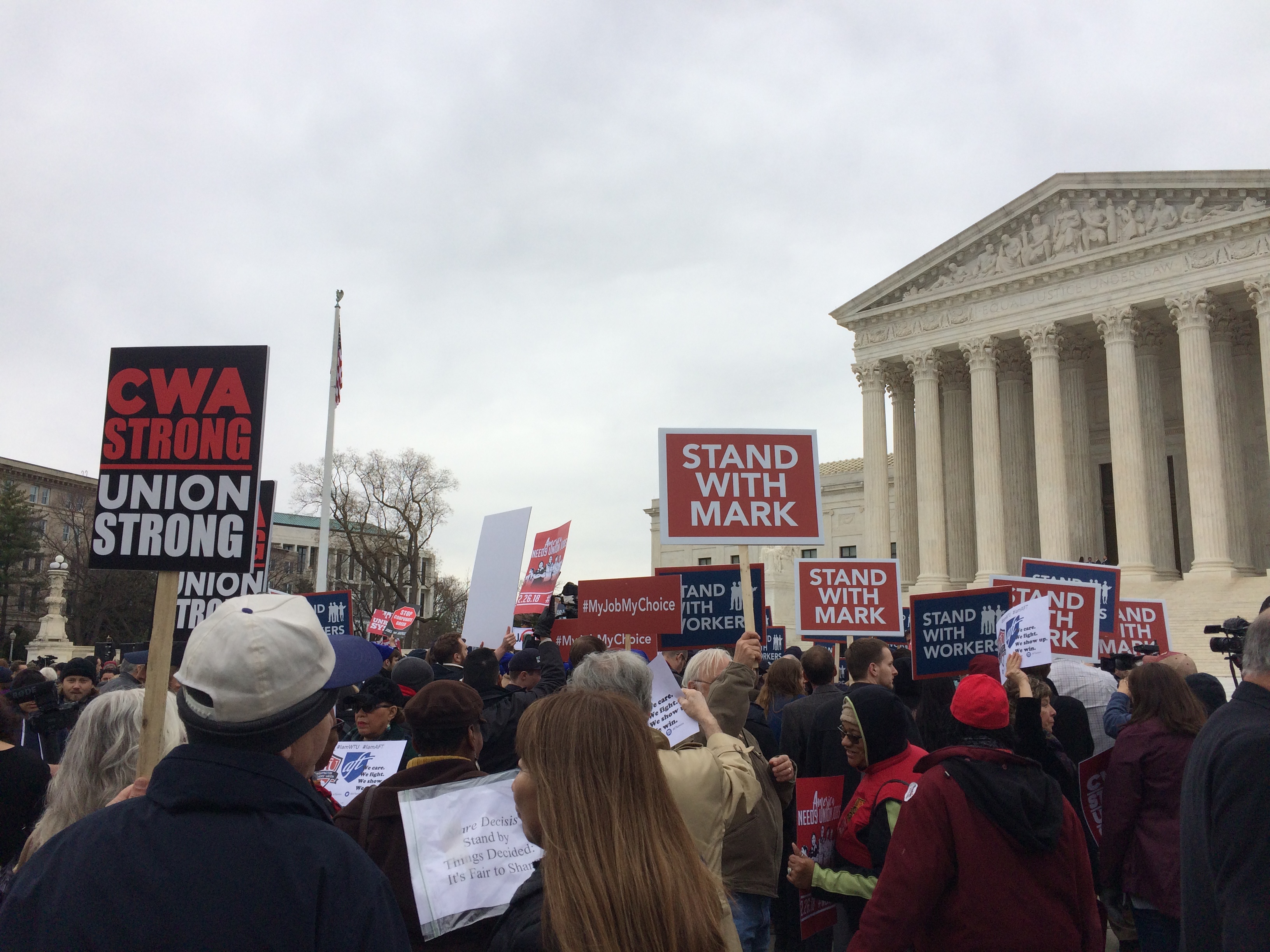 The U.S. Constitution bans compelled speech, like being forced to fund political activities. Labor unions currently can require dues in states without right-to-work protections so long as nonmembers have the option of paying a nonpolitical fair-share fee. The lawsuit argues that public-sector collective bargaining and political lobbying are the same, and thus all payments should be optional.

Democrats and others on the left typically believe that unions are critical to protecting workers and upholding their rights. They warn that optional dues could diminish the ability of unions to fulfill that goal because some workers might free-ride on the benefits by not funding the union. They also warn that the case is a corporate ploy to undermine those protections.

“We stand united in fighting a rigged system that rewards the super-wealthy at everyone else’s expense,” AFSCME President Lee Saunders said in a statement. “And we will not rest until we build an economy where everyone has a voice on the job, a seat at the table and a chance to succeed.” 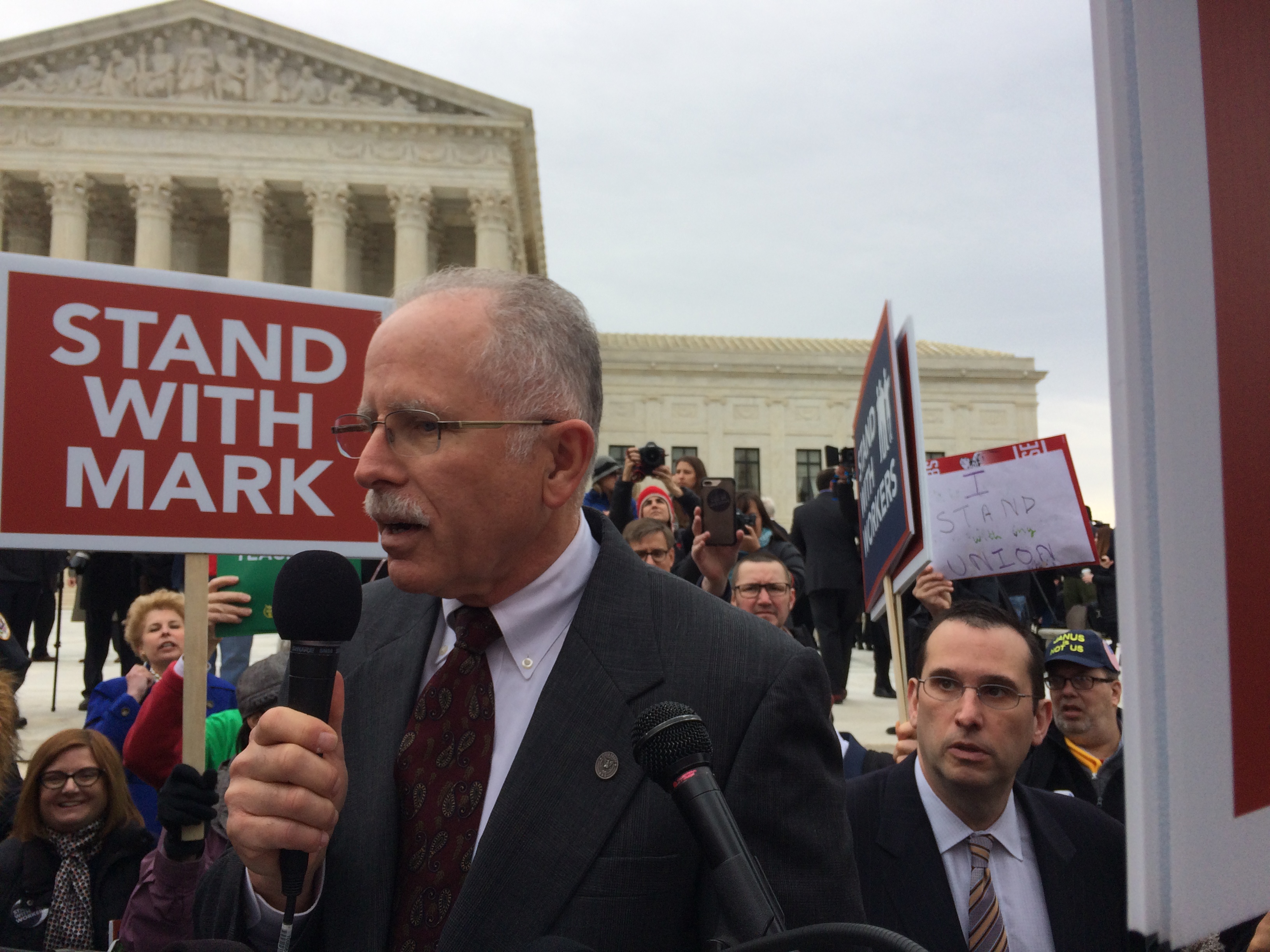 Unions that get voted in as an exclusive representative have to represent every worker in that workplace regardless of whether they paid, so some workers might choose not to, knowing they’ll get the benefits anyway. Both sides in the debate claimed to be for workers and freedom as they rallied during oral arguments.

“The challenges that teachers face each day seem insurmountable,” an elementary school teacher told union supporters during the rally. “These challenges are not insurmountable because we are not alone. The National Education Association is with us because it is us. This teachers’ union is built on unity. It represents our voice and empowers us as professionals.” 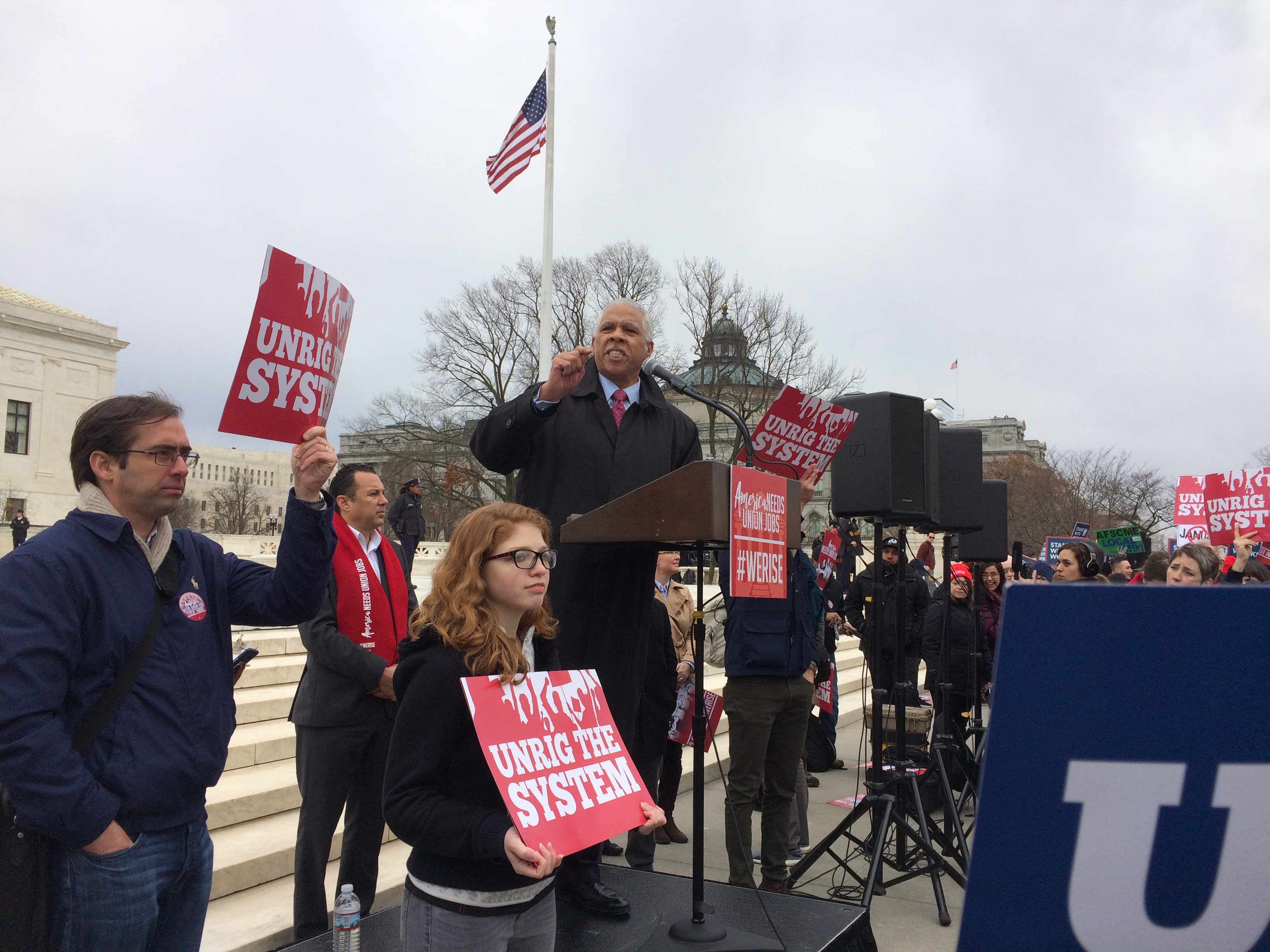 Mark Janus supporters have contested the workers are being forced to accept union representation. Some workers might not even want the benefits their workplace union is fighting for – but still are legally obligated to fund those activities. Seniority policies, for example, reward workers based on how long they’ve been working as opposed to how hard.

The Competitive Enterprise Institute (CEI) has filed legal briefs and issued coalition letters against mandatory union dues as the case has worked its way to the highest court. CEI released a report Jan. 24 arguing that unions should choose to form as member-only groups to avoid the free-rider problem.

“No worker who wants to serve the public should be forced to pay union fees against their will and at the risk of losing his or her job,” CEI labor policy expert Trey Kovacs said in a statement provided to InsideSources. “Since collective bargaining in the public sector is inherently political, it is a blatant violation of the First Amendment rights of public-sector workers. Everyone deserves the freedom to choose how they are represented at work and where their money goes.” 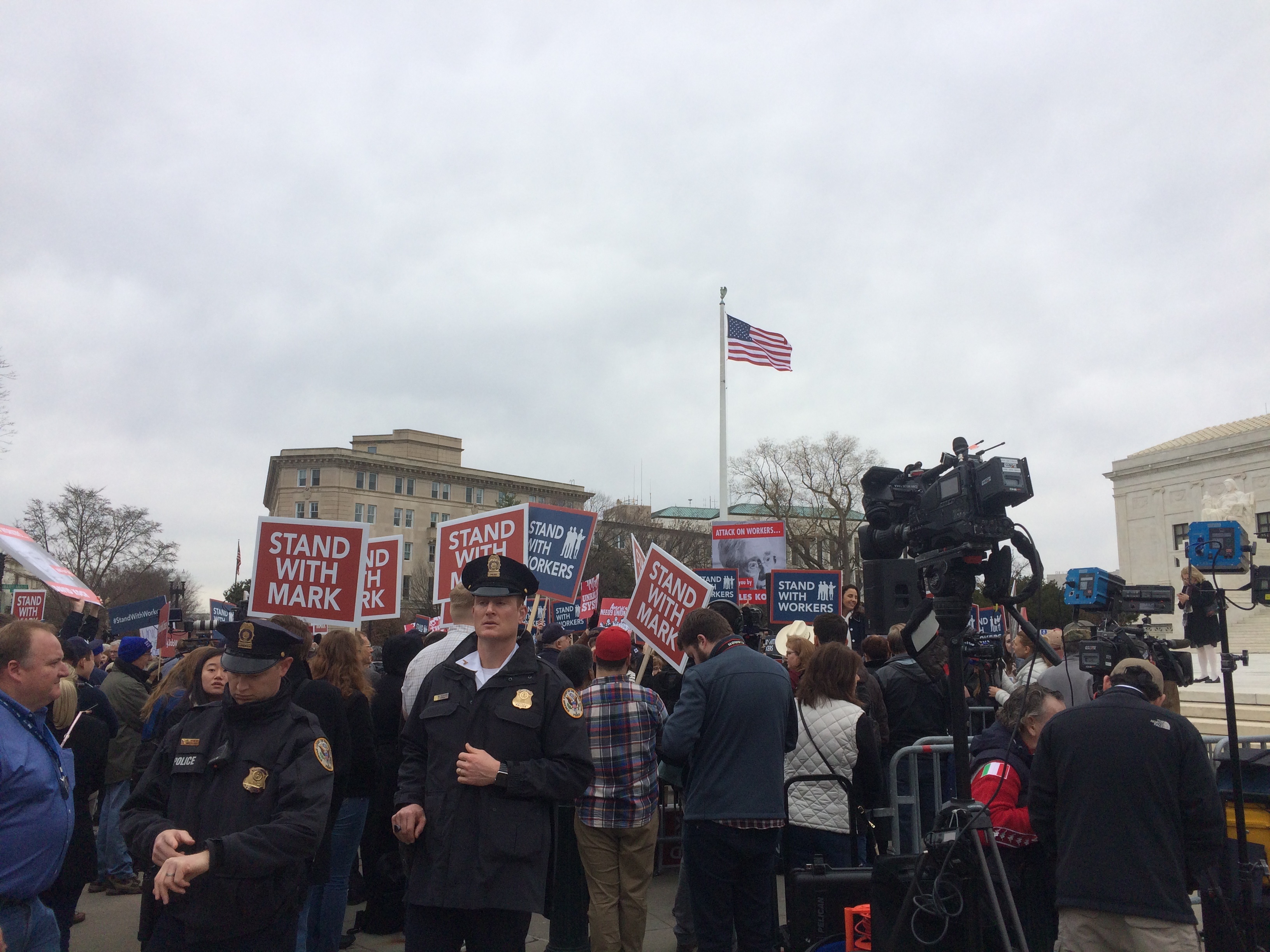 Labor unions that are members-only aren’t obligated to represent nonmembers. Labor unions generally decide not to become members-only because exclusive representation blocks other labor groups from trying to organize an established bargaining unit. But that also means they have to represent every worker in that workplace even if they don’t pay dues.

The U.S. Supreme Court is being asked to overturn its decision upholding mandatory fees during the 1977 case Abood v. Detroit Board of Education. The court found in that case that unions could require fees from nonmembers. It also established the nonpolitical fair-share fee.

Labor unions and their supporters have also argued that the state workers are being used in a corporate scheme to undermine worker rights. The Economic Policy Institute (EPI), a progressive research nonprofit, tackled the issue Feb. 21 in a paper that allegedly found the case is a coordinated effort financed by wealthy donors. 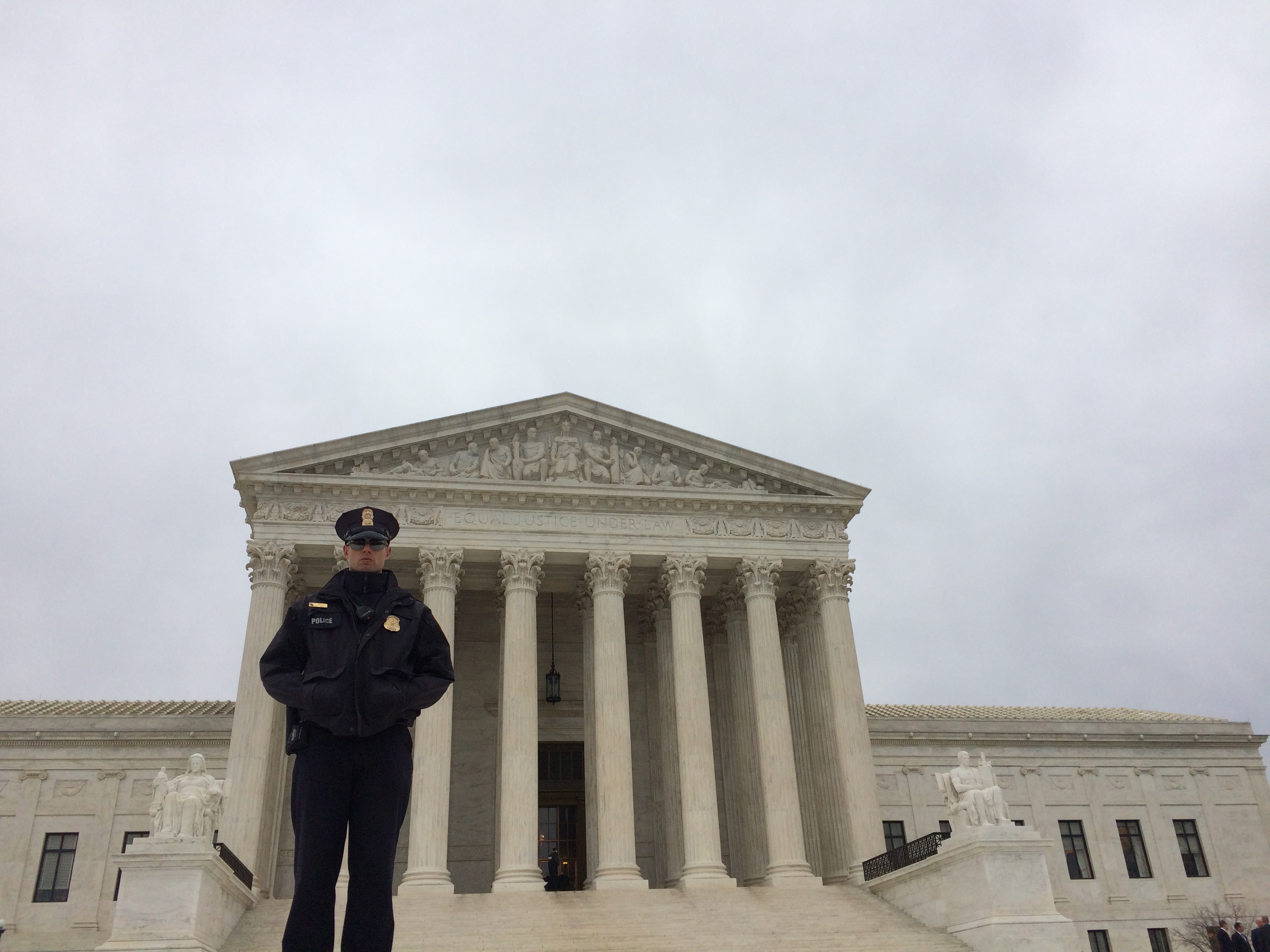 The U.S. Supreme Court heard a nearly identical case back in 2016. Rebecca Friedrichs eventually lost that case with the court split after the death of Justice Antonin Scalia. Justice Neil Gorsuch was appointed to fill the empty seat and is likely to become the deciding vote in favor of the state workers against the union.

Labor unions could lose a lot if the justices rule against mandatory dues. The Bureau of Labor Statistics (BLS) reported that the union membership rate stands at 34.4 percent for public-sector workers, but only 6.5 percent for private. But the true impact is still unknown since its unclear how many workers will actually choose to leave.

The U.S. Supreme Court could make a decision at anytime in the coming months with a ruling that is likely to come around when the current term ends in June.