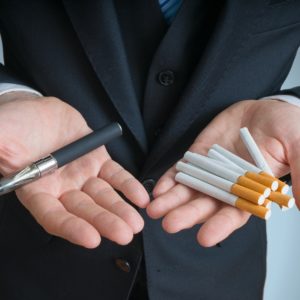 “We know enough right now to say that youth and young adults should not be using e-cigarettes or any other tobacco product, for that matter,” Murthy said.

Murthy’s comments are just the most recent in a long string of announcements and actions made by various Obama administration officials against e-cigarettes, handheld electronic devices that simulate smoking tobacco cigarettes by vaporizing a flavored liquid composed of various chemicals. Although not all e-cigarette brands contain the same chemicals, many of them include nicotine, making the products an important smoking-cessation tool for millions of Americans.

Virtually all scientists agree humans are better off not inhaling artificial chemicals, but they also agree e-cigarette vapor is significantly less harmful than using any existing tobacco-related product, including cigarettes, cigars, chewing tobacco and pipe tobacco. In 2015, a review by Public Health England, an executive agency in the United Kingdom’s Department of Health, estimated e-cigarettes are 95 percent less harmful than tobacco products. Kenneth Warner, a tobacco researcher at the University of Michigan, says even the “worst critics” of e-cigs and other similar products “would probably argue they’re half to two-thirds less dangerous” than tobacco products.

These findings and many others make Murthy’s attack on e-cigarettes more than just a little bewildering; they could cause serious harm. Tobacco use remains a serious public health problem. According to the Centers for Disease Control and Prevention, there are more than 480,000 cigarette-smoking-related deaths in the United States every year, and CDC estimates nonsmokers’ life expectancy is at least 10 years longer than regular smokers. Why then would Murthy or anyone else concerned about public health oppose their use?

Murthy and other e-cigarette opponents argue they can serve as a gateway to tobacco use, especially for young people, who are using e-cigarettes at increasingly higher rates. According to the surgeon general, the proportion of high school students estimated to use e-cigarettes now tops 15 percent.

What Murthy and others fail to acknowledge, however, is that while e-cigarette use among high-school-aged children has soared in recent years, traditional tobacco use has declined rapidly. The CDC reports in 2015, 9.3 percent of high school students reported smoking tobacco cigarettes within the previous 30 days, down from 15.8 percent in 2011, a decrease of 41 percent. If e-cigarette use significantly increases the likelihood a child will start smoking, these data are completely inexplicable.

Murthy’s statement is also wildly misleading. He argues against the use of e-cigarettes “or any other tobacco product” by young people, falsely suggesting e-cigarettes contain tobacco. This erroneous claim has been made countless times by many e-cigarette alarmists and government agencies, without any evidence at all to justify such an assertion.

For example, the CDC includes a category for “electronic cigarettes” on its website titled “Youth and Tobacco Use,” listed under a subheading titled “Estimates of Current Tobacco Use Among Youth.” Additionally, several states now tax e-cigarettes at the same rate as tobacco products, the most recent of which being California, which approved in November a substantial tax increase on e-cigarettes.

The surgeon general has a duty to warn the public, especially children, about dangerous health risks, but by waging this irrational war against e-cigarettes, Murthy is effectively discouraging people from using products that have been proven to help many Americans quit smoking with only minimal risks. In fact, so few people have experienced significant, measurable harm as a result of e-cigarette use, Murthy’s announcement is downright irresponsible.

Our children face much more serious threats than e-cigarettes every day, like driving their cars to school and eating sugar. Perhaps the government should wage wars against those “dangerous” behaviors as well.