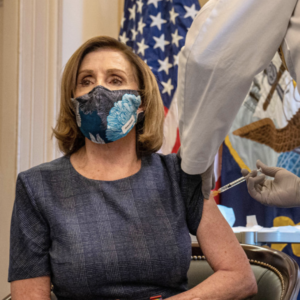 New Hampshire Gov. Chris Sununu has been taking shots at his fellow politicians who are getting theirs, accusing members of Congress of “cutting the line” by getting vaccinated ahead of front-line healthcare workers and the elderly.

“Every single one of those vials that’s being used for a congressman or a senator who’s been doing nothing, who hasn’t been on the front lines, is another vial of vaccine that isn’t going to a nurse or a resident in a long-term care facility,” Sununu said during an interview with a Boston TV station on Sunday.

“We’re on the verge of a shutdown right now and they’re getting in line for a vaccine when they’ve actually done nothing for the last eight months,” Sununu said. “I think I’m just trying to express what most people feel.”

Ana Navarro-Cardenas, a political strategist and commentator, slammed U.S. Sen. Marco Rubio for getting the shot.

“Young, healthy Senator, who spoke at rallies packed w/thousands w/o masks, who supports Trump -who’s down-played COVID & mocked those who wear masks, is 1st to get vaccine while most medical workers, elderly & infirm Americans, wait,” she tweeted.

And NBC’s SNL mocked Vice President Mike Pence for getting vaccinated early, and on national TV. “I’m sure all Americans are excited to see me, the guy who let COVID spread everywhere, get one of the first vaccines,” said actor Beck Bennett’s Pence.

Among those in Congress who’ve received a vaccination are neighboring state U.S. Sens. Edward Markey, Elizabeth Warren and Bernie Sanders; and New Hampshire Rep. Annie Kuster. The other three Democrats in the Granite State delegation opted out of the congressional vaccine supply, saying they are confident in the vaccine’s safety but wanted others who needed it more to get vaccinated first.

Colorado GOP Rep. Ken Buck did the same. “Members of Congress should not get special treatment. It’s not right for us to skip the line and receive the vaccine before at-risk populations and healthcare workers,” he tweeted Friday.

But others in the media have a different message, demanding that more elected officials get the shot and do so publicly — in particular, President Trump.

“Do you have plans to have President Trump get a shot in the arm on camera,” CBS’s Margaret Brennan pointedly asked U.S. Surgeon General Jerome Adams Sunday morning.

“Biden to Receive COVID Vaccine as Trump Remains on Sidelines,” was the Associated Press headline Monday.

“I don’t think that he [Trump] wants to be jabbed with a needle on live television,” New York Times White House reporter Maggie Haberman said on CNN. “I think that he considers that to be some kind of an act of weakness.”

In fact, having had COVID-19 within the previous 90 days, Trump may not be a candidate for the vaccine, but the political dilemma remains: Should politicians get an injection when offered, and get accused of taking it from someone who’s at higher risk; or turn it down and face charges they’re not doing their part to instill confidence in the vaccine?

Asked which course he would recommend for a politician with hopes for higher public office, Shrum admitted: “I don’t know.” Either way, he said, “it’s a one-month story, because in a month there will be a much larger supply of vaccines available and this conversation will be over,” he told InsideSources.

Lynda Tran, a D.C.-based Democratic consultant, says she would urge would-be candidates to step back for healthcare workers at higher risk. “While quantities of the vaccine remain limited, we have to prioritize frontline workers and the most vulnerable Americans,” Tran said.

“Candidates should support our front-liners getting vaccinated first but be willing to be public when their turn comes around.”

Joe Biden, who received his shot on Monday, showed his political savvy by both accepting the vaccination and apologizing for it.

“I don’t want to get ahead of the line, but I want to make sure we demonstrate to the American people that it is safe to take,” Biden said.

And what about Sununu’s criticism of politicians getting these early shots? Does that include Pence and Biden as well?

“The Governor’s frustration lies with Congress — 535 individuals who have done virtually nothing these last eight months to help the American people and brought this country within hours of a federal government shutdown in the middle of a pandemic,” spokesperson Ben Vihstadt told InsideSources.

Sununu put it more bluntly on Twitter Saturday: “Since when is doing nothing an essential function? It’s ridiculous that Congress is cutting in line ahead of folks in Long Term Care. I’ll be the first in line to get the vaccine when it’s my turn. Do your job & pass a relief package or fire them all.”