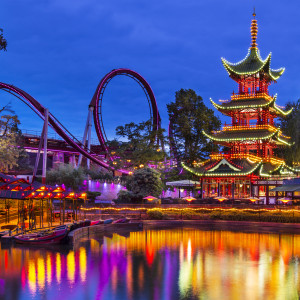 Part circus, part Disneyland, part botanical gardens, a visit to the Tivoli Gardens was like stepping back in time to the Victorian era.  Walking through the manicured gardens and the amusement park rides, I could easily close my eyes and envision ladies carrying parasols being escorted by men wearing top hats and cravats through the riot of colors and sound. Built in the mid-1800s and inspired by the pleasure gardens of Europe, Tivoli has the distinction of being both the second oldest theme park in the world and one of the world’s most energy efficient.  Tivoli’s 10 million kilowatt-hours of electricity consumption are powered entirely by offshore wind turbines, making it the world’s first amusement park to run on renewable power.

Energy policy goals in Denmark are decades ahead of those in the United States.  The irony is that sitting directly beneath its multitudes of wind turbines are massive quantities of oil and natural gas in the North Sea.  Denmark currently ranks as the 32nd largest net exporter of crude oil in the world and, from 1997 to 2012, was the only net energy exporter in the EU.  How can a country that has a surplus of fossil fuels justify the expense of transitioning their economy to be entirely dependent on renewable power?

For conservatives in the United States, renewable power is viewed as economically unfeasible given the significant increases in supplies of fossil fuel as a result of advancements in hydraulic fracturing, extraction of tar sands, and increasing crude oil production.  Many on the right also view federal mandates to decrease emissions as unconstitutional violations of states’ rights.  Denmark, in its drive to move to a fossil-fuel free economy, has already overcome these obstacles.

To progressives, climate change is a scientific fact and failure to take immediate action will result in a global catastrophe of near-biblical proportions.  Possible consequences of climate change read like a version of the plagues of ancient Egypt: increased risk of drought, fire and floods, rising sea levels, stronger storms, spread of illness and disease, economic losses, higher temperatures, and the possible extinction of one-fourth of the earth’s species by 2050.For these reasons, many—including senior military leaders and defense officials—view climate change as a national security threat.

In Denmark, the overwhelming consensus among both the government and the public is that climate change is a fact, moving to renewable energy made long-term economic sense, and a renewable energy based economy improved energy security.  The political debate between the Danish “Left” and “Right” was merely about how long Denmark should take to transition their entire economy to renewable power.  The deadline they ultimately chose?  By 2050.

The Danes set these ambitious goals through consensus building between political parties, Danish Government Ministries, and trade associations for the approximately 450 energy distribution companies, including oil, electricity, and natural gas producers.   The public widely supports the plan and in some respects reducing carbon emissions is viewed as a matter of civic duty and national pride.

Recently, the Obama Administration has taken a page out of Denmark’s playbook by announcing the Clean Power Plan, an Environmental Protection Agency regulation designed to cut carbon pollution from the nation’s power plants by 30% from 2005 levels by 2030.  Unlike Denmark however, the implementation of this Plan has not been reached by consensus.  During his first term the President oversaw a highly contentious fight to pass an ambitious climate change bill that ultimately failed.  In a controversial decision, the President has cited the 1970 Clean Air Act as authority to issue the regulations.

The Clean Power Plan emphasizes flexibility.  Under the proposed rules, states may reduce emissions by making changes across their entire electrical sector.  Rather than requiring carbon emission coal plants to shut down, states can choose from a menu of options including investing in energy efficiency, installing renewable power generation, and participating in “cap and trade” programs.  After signing the new regulations, Gina McCarthy, the E.P.A. Administrator, remarked that the plan would do two things:

“First, setting achievable, enforceable state goals to cut carbon pollution per megawatt hour of electricity generated. And second, laying out a national framework that gives states the flexibility to chart their own, customized path to meet their goals.”

This approach mirrors the Danish model, which sets a nationwide annual electricity savings goal and then divides the annual share of savings across three sectors: oil, electricity, and natural gas and district heating.  Trade associations representing each sector then determine what percentage of those electrical savings each member company will be responsible for in proportion with their market share.  As long as the entire sector meets its yearly target, it makes no difference if an individual company fails to hit its targets.  Similar to the “cap and trade” system proposed by the new E.P.A. regulations, Danish companies can buy, sell, or trade certificates for energy savings to address shortfalls or monetize excess energy savings.

The E.P.A.’s plan advocates a multi-pronged approach to decreasing emissions.  First, power generation from existing, aging plants can be shifted to newer, more efficient plants or replaced with clean sources of power, including nuclear, solar, and wind.  In addition to reducing emissions from power generation, the approach advocates investing in technologies that make energy use more efficient in homes and business.  Under the Clean Power Plan, by 2030 the carbon pollution from the power sector across the U.S. is projected to be 30% less than when compared with 2005 levels.

While a significant step in the right direction, the Plan is missing a few key initiatives.  The Danish model includes the development of “smart grids,” wind farms, intelligent meters, new transmission lines, and the expansion of energy generation through biogas and biofuel.  In the transport sector, Denmark is undertaking a program of creating a network of mass-transit, bike “super-highways” connecting suburbs to the capital, electric car re-charging stations, and promoting the infrastructure required for hydrogen cars.  An energy renovation network has been established with participation from more than 100 different companies, interest groups, and universities, and is tasked with developing initiatives to optimize energy savings.

Danish businesses have seized this initiative as an opportunity rather than a burden.  The construction industry is projected to experience a boom through retrofitting efficiency projects for public buildings and housing.  Danish companies developing these technologies are also exporting their expertise to foreign markets.  In China, the world’s largest energy consumer and a country dealing with major environmental challenges, Danish companies are selling technology and consulting on wind and biomass power projects.   As a result, the development of this technology is projected to create thousands of new manufacturing and research jobs in Denmark each year.

U.S. government and industry must take inspiration from the Danish model.  Developing comprehensive clean energy technologies, both in generation and in efficiency, will benefit not only the environment, but the U.S. economy as a whole.  Companies that develop and implement these clean energy technologies will be in a position to be global market-leaders in an industry that is projected to see massive growth as countries tackle the problems of energy efficiency and climate change.

Adam Tiffen is a veteran of three tours in Iraq and Afghanistan and a member of the Truman National Security Project’s Defense Council. Follow him on Twitter: @TiffenDC.