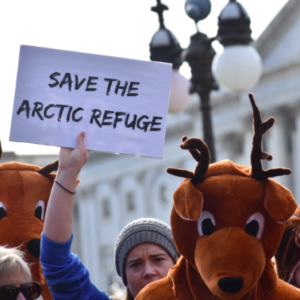 A tweet war broke out this week between environmental activists trying to interrupt Chevron and ExxonMobile shareholder meetings and pro-energy and pro-consumer groups drawing a stark line about what they see as the stakes in the battle over oil exploration in Alaska.

Leading the charge for the environmentalists was the Sierra Club, which put together a protest outside of Chevron’s annual shareholder meeting in San Ramon, CA.

The Sierra Club tweeted to its 349,400 followers: “Big Oil companies like $CVX could soon be heading to the Arctic Refuge to spend millions destroying a pristine, sacred landscape — with potentially little to no payout. Oil company stockholder season is starting, RT to tell @chevron this is bad business!”

Steve Milloy, though, who popularized the term “junk science” and works with the Energy & Environment Legal Institute, hit back.

“Such BS. The ANWR area to be drilled is less than 0.01%. Radical green groups like @SierraClub and @350 want Americans beholden to the whims of mad men in Venezuela and Iran,” he tweeted.

ANWR – the Arctic National Wildlife Refuge – is an expanse of 19 million miles created in 1980 under the Alaska National Interest Lands Conservation Act. Within that is an area called the “1002 Area,” which is about 1.5 million miles on the coastal plain. For comparison, imagine a land area the size of Massachusetts sitting inside one roughly the size of South Carolina. As Milloy tweeted, the area within ANWR is extremely small.

The potential for oil development, though, could be significant.

The U.S. Geological Survey estimates that there is potentially 5.7 billion to 16 billion barrels of oil underneath area 1002 with about 74 percent of that on federal lands and the rest on state and native lands. U.S. Department of Energy estimates that ANWR represents about 8.7 percent of overall undiscovered yet recoverable oil in the U.S. Those remain estimates, though, because there have been no surveys of the region since 1998.

“We didn’t have as precise technology but we knew there was a generous supply of oil there,” said Tom Pyle, president of American Energy Alliance. “It was always up to future Congresses whether to authorize and move forward with exploration and production leasing.”

The controversy of drilling in ANWR has been raging since the Carter Administration. Pushed primary by House and Senate Republicans and opposed by Democratic counterparts, the parties swapped legislative tactics either to protect the region or open it up for exploration.

Rep. Jared Huffman (D-CA) has introduced the Arctic Cultural and Coastal Plain Protection Act to prohibit the Bureau of Land Management from “administering an oil and gas leasing, development, production, and transportation program.” Although the bill has widespread support from Democrats and one Republican and may reach the House Floor for a vote, it’s not likely to move in the Senate or curry favor with the Administration.

Republicans finally managed to push ANWR exploration through by attaching it to the 2017 tax bill.

“It was always a couple votes short and of all people, a real estate developer from New York got it done,” Pyle quipped.

But opponents aren’t planning to let a new law stand in their way.

The Sierra Club and allies are targeting Chevron and ExxonMobile, both of which have arctic drilling operations, through protests, digital campaigns and petitions. Lawsuits are also a prime area of mischief-making between activists and the companies to halt any progress that might be made toward oil development.

“We don’t know how much oil is there,” said Leah Donahey, legislative director for the Alaska Wilderness League. “From our perspective, we don’t need to continue to focus on oil drilling in these extreme places that are just so critically important.”

Consumer Action for a Strong Economy tweeted at Sierra Club that it was “misguidedly protesting energy companies at shareholder meetings over potential future projects in Alaska, essentially protesting lower energy costs for consumers and #energyindependence for America.” The Clear Energy Alliance said that “Drilling in #ANWR is good for Alaska and America. It would provide jobs, generate tax revenue, and increase American energy and national security. #Oil and #NaturalGas are essential to everything in the modern economy and will remain so for a long time to come.”