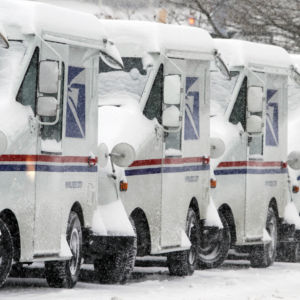 On January 1, the cost of a first-class stamp will increase by one penny, from 49 cents to 50 cents. The U.S. Postal Service is determined to make customers pay more, as they dream up ambitious new schemes that would plunge the agency ever deeper in debt. Morgan Stanley equity analyst Ravi Shanker aptly summed up the situation, noting, “The future is bright for the Postal Service — if it doesn’t go bankrupt first.”

Instead of sensible reforms like ending Saturday delivery and buying a mixed, varied fleet of off-the-shelf vehicles, the Postal Service is digging a deeper hole for itself by way of expensive “investments” into unrealistic fleet designs. By electrifying their fleet wholesale and introducing driverless trucks, the Postal Service is guaranteeing further financial headaches down the road. Customers across the country, as well as taxpayers, will be on the line for billions in unnecessary expenses if the misguided schemes of postal officials proceed unchecked.

With 215,000 mail trucks in operation, maintaining equipment requires no small chunk of change. The Postal Service is experimenting with multiple ways of replacing the 140,000 trucks in service for more than two decades, as prototype tests run in cities such as Tuscon, Arizona, and Flint, Michigan. While a competitive procurement process should lead to a lower-cost, better-quality fleet, there are already disheartening signs that the main options presented would break the bank. A team that includes truck body manufacturer VT Hackney Inc. and electric truck company Workhorse Group Inc. has unveiled an electric postal vehicle, which has been spotted delivering mail in suburban Virginia.

In addition to electric vehicle offerings, the Postal Service has made clear that half of the prototypes for the replacement vehicles will “feature hybrid and new technologies, including alternative fuel capabilities.” Despite the rationale of minimizing the environmental effects of its fleet, phasing in “low carbon” technology is unlikely to accomplish green goals and will balloon the service’s already-large debt.

To see why, Postal Service planners would be wise to examine other large-scale electrification ventures. In Germany, for instance, cash-strapped municipalities are already fearful of the drive to replace conventional buses with electric buses projected to be 2.5 times more expensive.

Examining global adaptation costs, Bloomberg New Energy Finance analysts found last year that electric fleets will remain more expensive than their conventional counterparts until 2022, even after government subsidies are taken into account. But taxpayer subsidization costs are real, and any large-scale venture by the Postal Service to electrify their feet will mean the usage of millions of dollars in tax credits from Uncle Sam. With the Senate version of the tax reform bill leaving in place the costly $7,500 tax credit for purchasing electric vehicles, taxpayers would pay dearly for the service’s “green” transition.

The service would hardly fare better should it decide to “invest” in an autonomous fleet. It plans to introduce an armada of the self-driving trucks on rural routes by 2025, according to an Office of Inspector General report released last month. While the OIG is optimistic about the potential for autonomous technologies to cut down on driving fatalities, it noted multiple challenges that could prove costly and dangerous. Even assuming that large-scale cost reduction, the report projects that a driverless fleet will cost $7,000 more per truck than for conventional vehicles.

But indirect costs can prove to be even greater. Autonomous vehicle sensors, for instance, will likely not work properly in bad weather unless infrastructural markings are clear. This is not the case in many rural areas in which driverless trucks will likely make a debut; signs and paint would need to be revamped over thousands of miles of road in order to prevent large safety issues.

To facilitate the rise of a driverless fleet, taxpayers would inevitably be on the hook for billions in new spending. Just one example: The color of traffic lights is not detectable to vehicle cameras when the sun is immediately behind the light. Governments’ interface for alerting cars to proceed cautiously in construction zones is designed for humans, and would need to be revamped in order to convey the same information to robots.

After decades of debt accumulation, the Postal Service must deal sensibly with an aging fleet of delivery trucks. But all indications are that the service will take the most expensive route possible in replacing its dated machinery. Between costly electric prototypes and unrealistic autonomous technologies, postal promises will break the bank.

Moreover, taxpayers will almost certainly foot the bill for the infrastructural changes and “green” incentives that come with the schemes dreamed up by the Postal Service. By instead procuring a mix of off-the-shelf vehicles to replace aged trucks, the Postal Service can forge a practical, cost-effective path forward.

While having some electric vehicles alongside non-electric trucks could be useful for comparing efficiencies, going fully electric benefits no one and will break the bank. With billions in expenses on the line, postal planners should keep their heads out of the clouds.