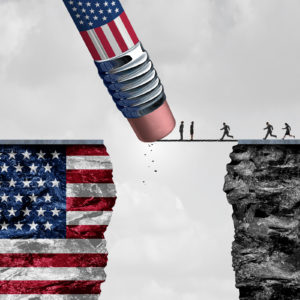 Teamsters President Jim Hoffa had strong words for lawmakers Friday after they failed to pass legislation that would have help immigrants who were brought into the country illegally as children.

Deferred Action for Childhood Arrivals (DACA) protects certain immigrants who were brought into the country illegally as children. Congress was unable to pass legislation that would have protected these immigrants, known as Dreamers, from the looming threat of deportation.

Former President Barack Obama implemented the initiative through executive action in 2012. President Donald Trump began phasing out the initiative in the later months of last year – leaving lawmakers until March 5 to pass something. Congress tried and failed to do just that Thursday.

“The issue of immigration is not always easy and undoubtedly will be closely parsed by those in Congress,” Hoffa said in a statement. “However, immigrant kids in good standing should not be penalized because elected officials refuse to get their act together. They deserve an opportunity to continue to live their lives with their loved ones in their adopted home country.”

The Senate considered a few ideas that would have implemented a pathway to citizenship for almost two million Dreamers. The president actively opposed the main bipartisan proposal – while supporting another that would have also curtailed legal immigration. In the end, both bills failed to receive enough support.

“This nation is the only home these children have ever known,” Hoffa said. “Yet too many lawmakers, most of whom repeatedly make a point of saying they stand up for families, are turning their backs on them in their time of need. That’s not right and is plain un-American.”

Trump has promised to better enforce immigration law and pursue policies that protect domestic workers from unfair foreign competition. The administration has said it will prioritize criminal aliens, but critics have expressed concern over mass deportation – which would include illegal immigrants that are otherwise acting lawfully.

“For centuries, this country has served as a beacon of hope to millions across the globe who sought opportunity and refuge,” Hoffa said. “We mustn’t allow that light to be snuffed out by callous members of Congress seeking to politicize the fate of those who had no choice in coming to this country. These children are our children now.”

The Teamsters union isn’t alone in its opposition to the program potentially being eliminated. The AFL-CIO claimed that the initiative and the temporary protected status program are essential in fighting for better wages and working conditions. Unite Here has also supported efforts to protect Dreamers – while being at the forefront of helping another immigrant group that has lived in the United States legally for years after being displaced from its home country.

The Pew Research Center estimated that up to 1.7 million people might be eligible for DACA when it was first started. Republicans and other critics denounced it as a severe overreach of executive powers. Obama also attempted to expand the program to millions of more recipients later on but the move was rejected by the courts.