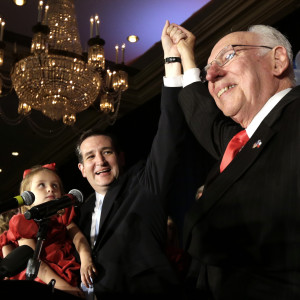 Ted Cruz’s Father: a Right-Wing Celebrity in His Own Right

He’s still unknown to most Americans, but Rafael Cruz, the 76-year-old father of Texas Sen. Ted Cruz, has quietly become one of the most influential figures in conservative circles. A one-time Cuban revolutionary turned American pastor, he’s a driving force behind the political career of his son, who may well be the Republican presidential nominee if front-runner Donald Trump falters.

National Review noted Rafael is the senator’s “preferred introductory speaker, his best messenger with evangelicals, and his favorite on-air sidekick.” On the stump, the elder Cruz talks about being imprisoned and tortured under Cuban dictator Fulgencio Batista before escaping to the United States, praising his adopted country as an exceptional nation.

But while Rafael’s story has resonated with religious right voters in early primary states like Iowa and South Carolina, there remain questions as to whether the outspoken pastor would be an asset or a liability in a general election — as BuzzFeed’s compilation of his controversial, conspiratorial statements makes clear. (A highlight from the exhaustive list is his desire to send President Barack Obama “back to Kenya.”)

For now, though, Rafael continues to impress the relevant constituency, winning favor with conservative activists and the ideological media Republican voters trust.

The latest demonstration came with Tuesday’s release of “A Time for Action: Empowering the Faithful to Reclaim America,” in which father Cruz makes the case for his son’s White House bid. Published by WND Books, part of the conspiratorial conservative website World Net Daily, the text includes a forward by radio host and Blaze founder Glenn Beck. 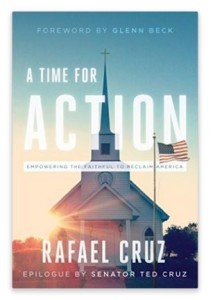 “Rafael Cruz is one of the greatest freedom fighters of his generation,” Beck says, according to Right Wing Watch. “Ted Cruz will do anything to protect and preserve freedom.”

This is part of an ongoing lovefest between the Dallas-based media mogul and his chosen candidate, one that reveals the power of the father-son duo in the Cruz campaign.

For years, Beck has waged war on so-called “establishment Republicans,” saying the GOP leadership in Washington has failed to fight for the conservative cause. #DefundTheGOP was his rallying cry at one point.

Given that background, Beck has been delighted by Ted Cruz’s oft-expressed contempt for the establishment, his aversion to compromise and his rejection of the very norms of government business in the capital.

Although Beck maintains good relationships with several 2016 hopefuls, Cruz has been the former Fox News star’s pick from the start. Beck is convinced he can count on Cruz to stand for conservatism when other candidates wouldn’t, and the senator’s father is a big part of why the host is so sure. Even if Beck didn’t trust Ted immensely, he’s said he thinks Rafael could hold him accountable.

The appeal of Rafael’s story is easy to understand. As D Magazine in Dallas pointed out, he was “an immigrant who moved here legally, taught himself English, worked his way through college, started a business, and eventually had a son like Ted. And now that his progeny has become a senator and a galvanizing conservative crusader, Rafael is the father of the year, the cultivator of a great hope for millions of Americans.”

There is some controversy about Rafael’s past and the stories he tells about it. In fighting the repressive Batista regime, he supported Fidel Castro, who would himself become a brutal communist dictator. He has since said Castro’s actions in office appalled him, comparing them to Obama’s policies.

The New York Times also ran a piece last year questioning Rafael’s role in the revolution, even as it stressed that he was unquestionably brutally beaten by Batista’s agents. The Cruz campaign dismissed the newspaper’s sources as politically motivated.

Yet none of this is likely to diminish the right’s affection for Rafael. Especially when it’s his word against the New York Times, conservatives know what they believe.