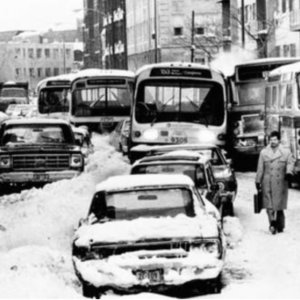 Ted Cruz Wasn’t The First Politician Hurt by a Blizzard

Few things can shove political aspirations into the deep freeze faster than a bad winter storm. Just ask Sen. Ted Cruz. The Texas Republican is still shoveling his way out of a serious gaffe.

While folks in the Lone Star State huddled in homes without power and water amid a deadly Arctic blast, Cruz and the missus were soaking up rays down in sunny Cancun. Hell hath no fury like a voter scorned. So instead of laying plans for a second White House run in 2024, the Texas Republican is now doing frantic damage control back home.

He should have remembered what happened to another rising politician nearly 50 years ago.

It all started on a Monday afternoon in December 1976, when Chicago mayor Richard Daley, Sr. dropped dead from a massive heart attack while on his way to lunch. That ended Daley’s 22-year reign as head of America’s last big-city political machine and began a power struggle that made Kremlin schemers look like amateurs.

Things looked bright for the new Hizzoner as he savored honeymoon popularity. Bilandic navigated a wave of strikes by various labor unions—including the gravediggers—and survived a terrorist bombing at City Hall. He also launched the Chicago Marathon and even ran the first one in a respectable four hours.

But honeymoons never last. For Bilandic, ice-cold reality came calling on western winds in January 1979. Nestled on the Lake Michigan shoreline, Chicago routinely shrugs off winter storms that make other cities stagger and fall. So, nobody gave it much thought when forecasters called for two inches of snow on Saturday, January 13.

They got nearly two feet instead, blown in by a blizzard’s 39 mile-an-hour winds. Chicago froze in its tracks in the city’s fourth worst storm.

The famous “L” rail system couldn’t move, sending hordes of passengers to city buses instead. Frustrated drivers had to creep down whatever streets were navigable. Rides that usually took half an hour lasted half a day. Commuters were furious.

For Bilandic, it was all downhill from there.

The storm injured 15 people and claimed the lives of at least five others (one killed by an overworked snowplow operator who became unhinged and began ramming cars). O’Hare International Airport was closed. Uncollected garbage piled up as garage roofs collapsed from the weight of all the white stuff. Schools were shut down for a week.

There was so much snow, plows couldn’t begin clearing residential streets until January 20. However, The Chicago Tribune reported, one street was beautifully plowed—the street where Bilandic lived.

Then Bilandic did perhaps the only thing that could have made an incredibly bad situation even worse. Streets were clogged by cars that had stalled and were double, sometimes triple parked. With snow up to windshields, many people simply couldn’t reach their vehicles. The mayor decided to get tough and ordered police to ticket all those stranded cars. The sick, the elderly, folks too poor to afford pay parking, it didn’t matter: everyone got a ticket.

What started as a feeling among many Chicagoans that Bilandic wasn’t up to the job quickly turned into seething hatred. And in a burst of remarkably bad luck, the mayoral election was just weeks away. Going into 1979, Bilandic seemed a shoo-in to win reelection. But with winter weather dragging into early March, he was suddenly fighting for his political life.

Then Chicagoans pulled his life support.

In a Democratic primary that saw one of the highest voter turnouts in city history, Bilandic was given the boot by Jane Byrne, a long-shot candidate in her very first election bid. The defeat was a major blow to the Daley political machine.

Humiliated, Bilandic returned to practicing law. He later became an appellate judge, then went on to the Illinois Supreme Court, where he served as chief justice for two years. But any chance of running for governor or senator or even serving two decades as Chicago mayor like his predecessor were forever swept away by that blizzard in 1979.

It’s a lesson politicians everywhere should always remember. When the wind grows cold and the sky turns dark, better hunker down at home with a bowl of chili. And lay off the parking tickets, too.