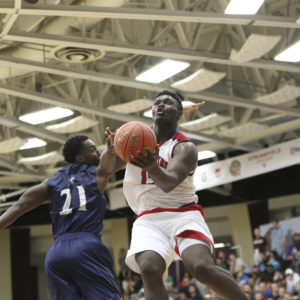 The watch announcements had been made. Must-see TV, it was called.

The occasion: A superstar, all-world high school senior basketball player from South Carolina was set to announce his college choice. The basic who, what, where … in news.

However, this situation was anything but basic.

Zion Williamson, yes THE Zion Williamson — a Paul Bunyanesque figure in a 6-foot-6, 272-pound teenage body — would tell an eager national audience his college choice for the incoming fall freshman class of 2018.

Call it reality television — in short-form.

It’s 15 minutes of fame for Williamson’s hometown of Spartanburg, S.C., in sort of an Academy Awards-type atmosphere. And abroad, hey, fame travels, too … even at last year’s basketball adidas EUROCAMP in Italy, where Williamson wore a white T-shirt with a black-lettered inscription: “Spartanburg Made Me.”

“It’s fun because, going all over the world, I was in Italy and people were asking me for pictures, ‘Are you Zion? I don’t believe you’re in Italy right now,”’ Williamson, who is very polished with the media, told ESPN. “This is crazy. I tell (people) my name, and they go, ‘Oh my God, it’s really you.’ That part’s fun. People knowing who I am.”

Well, in the global nature of today’s basketball world, that is the new scene for athletically talented 17-year-old YouTube phenoms who can dunk a basketball with “May the Force Be With You” power and dribble through high school defensive players with the slick wizardry of the Harlem Globetrotters.

Williamson reportedly had narrowed his choices to six schools: Kansas, Clemson, Kentucky, North Carolina, Duke and South Carolina. The well-spoken Williamson saw coaches, assistants and recruiters converge on Spartanburg for month after month. Williamson is ranked as the No. 2 high school senior in the nation, according to the ESPN 100 recruiting list. (Can you imagine the hoopla — no pun intended — if he were the No. 1-ranked player?)

It’s truly amazing how teenage athletes who play in undersize, cramped gymnasiums in little towns to medium-size cities garner so much national attention. Spectators, coaches, TV executives, sports media and college administrators alike have waited for Williamson’s decision. For a few months, a nondescript municipality can be at the center of the universe.

In Spartanburg, population 38,000, Zion Williamson was the top news story in town on Jan. 20, his mother’s birthday, and, coincidentally, it also marked Donald Trump’s one-year anniversary in the White House. And ya’ll thought the number-one topic during the weekend was the federal government shutdown.

One wide-shouldered teenager can do wonders for areas not named Chicago or Los Angeles or New York or Philadelphia or Boston.

Spartanburg is known for producing “Mount Zion,” being the summer training camp site for the NFL’s Carolina Panthers and embracing the moniker, “Hub City,” because, in the 1800s, seven different train lines sprouted from the town like spokes on a bicycle wheel, and thus the touristic Hub City Railroad Museum.

But has anyone asked Williamson about a possible college major? Probably not.

Still, we sure know his vital signs — as in Williamson’s statistical chart of 37 points and 13 rebounds per game.

Williamson plays with a swirl and a spin that belies his hulking frame. ESPN described Williamson this way: “While his dunking ability and jaw-dropping athleticism are his best attributes, he’s more than that. The power forward is built like an (NFL) tight end — but he combines that strength and physicality with quick feet and adept passing ability. Williamson is still at his best in transition, though, and will need to get in better shape and improve his shooting ability to dominate at the next level.”

During the recruiting process, some websites documented Williamson’s every move on campus visits with digital photo galleries. For instance, rapt viewers and ardent fans can see photos and video of Williamson visiting the University of North Carolina football stadium (though he isn’t a football player), as well as tributes to him from campus fraternities.

Boutique websites such as the aptly named 247Sports Crystal Ball listed the college favorites in the Williamson Sweepstakes based on their writers’ insights, with Clemson leading the pack.

But when it came time for the high school/college version of the Oscars, Williamson disappointed five schools and elated a Very Big One when he declared, “I will be joining the brotherhood of Duke University.”

In explaining his decision, Williamson offered, “When I went on my official visit (to Duke), I already felt like I was part of the family. They just gave me a very positive, family-type vibe.”

That decision left many fans miffed and disillusioned, especially those at the watch parties at Clemson University, which is only about 60 miles from Williamson’s home.

As one Clemson fan posted on Twitter, “Going to be a very disgruntled congregation on Sunday …”

Still, it was a magical moment in the spotlight for two sentimental winners — Zion Williamson and, more important, his proud hometown.