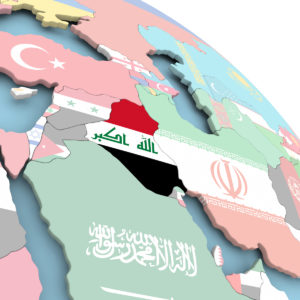 Confusion is a powerful tool. Per media reports that revealed that the Iraqi federal government began operations to take control over the region of Iraqi Kurdistan, a lot of confusion looms.

Within the Beltway, people are lost and questioning whether the Trump administration made the best decision of U.S. neutrality in the Iraqi-Kurd dispute. However, the only thing that can be taken seriously is that many in the international community — including President Trump and the leadership of the United Nations — are non-committal to either side. But, something suggests otherwise.

As the situation on the ground plays out, it is becoming more evident that Iraq and Iran are coordinating to maintain a regional hegemonic control over people who are due their liberty to live without interference from secular and theocratic autocracies.

Reports have arisen that Iraqi forces coordinated with Iranian forces over the invasion of Kirkuk. Ultimately, this signals to the many who want a peaceful resolution to the Kurdish independence row that Iraqi Prime Minister Haider al-Abadi has been seduced by the Revolutionary Guard.

Compounding the crisis, Trump’s neutrality has pushed the Iraqi federal government into the arms of the Iranians. And, obviously, the match fits as both the Abadi government in Baghdad and Tehran’s theocratic dictatorship have a common problem: the Kurds.

Federal forces stormed into Kirkuk with the intention to exercise power over the independence referendum — that the Kurds overwhelmingly supported — introduced by Massoud Barzani. But several state-backed Shiite militias that have sworn allegiance or affiliation in some degree to the Islamic Revolutionary Guard Corps joined in the violent fun — with federal forces.

The reason? Tehran has finally made its play to exert more influence over Iraq to fill the major gap of power left by the waning elements of American influence.

An Iraqi-Iranian Shiite alliance is on the rise within the region and it is incumbent upon the United States to finally make their position on the Kurdish independence issue known.

Yes, the State Department publicly denounced the referendum. Several U.N. powers are in opposition to a free Kurdistan. However, the crisis here is that Iran views this opportunity as an exploitative one. Exploitative in the sense that America’s debt to the Kurds is a weakness of which advantage will be taken.

Thus, Trump’s neutral stance and the alignment between Baghdad and Tehran could be the diplomatic climate needed to spark a civil war between factions that once served side by side against the scourge of Islamic State — with the backing of the American military.

In the end, the only narrative that comes from this is one of irony. When he entered office, Trump swore to stomp out Iran’s meddling in the Middle East. He blew his chance here.

The other element of irony is that the current Iraqi military has received training and equipment almost exclusively from the United States’ taxpayers. Given this, there is high probability that the United States, indirectly, armed the Iraqi military and the Iranian backed militias at their side to harm and assert provocative action against the Kurds. Let’s just hope that the headlines in the coming weeks don’t highlight the deaths of Kurdish women and children at the hands of Iraqi troops sporting machine guns paid for by the American people.

The key takeaway is that the Iraqi-Kurd dispute is a complex geopolitical crisis that was spurred by Iran’s ambitions to control the Middle East.

In the latest display of this ambition, it is becoming more and more evident that Tehran has a level of control over Baghdad that the United States once had. Now, the United States is demoted to a minor status as countrymen fight each other.

Is Kurdish independence worth the breakout of a civil war? It sure looks like it given the realities that the Kurds have no friends in this game of self-defense.

With nations like Iran now flexing their muscles, American influence in the Middle East can be further downgraded. No matter the outcome of this dispute, all the cards remain in the hands of the Iranians as they prepare to become the next center of Islamic power.