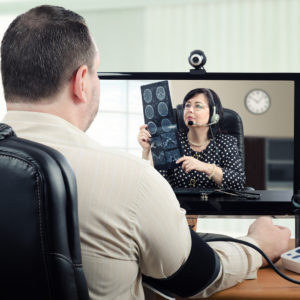 Telemedicine as Lifesaver — Ian Tong and Doctor on Demand

Imagine you’re on a remote ranch, in the middle of the night, when a pain strikes. It’s probably indigestion, but you wonder whether it might be your heart. Before telemedicine, you had three options: Drive many miles to an emergency room. Dial 911 and wait for the rescue squad. Return to bed and hope for the best.

Telemedicine offers a fourth option. On your smartphone or tablet, click on a “telemed” app. In a minute or so, talk eye-to-eye with a doctor.

Sometimes telemed is about convenience. Months ago, a bad sinus infection hit me at the start of a holiday weekend, when my doctor’s office was closed. Rather than trudge to an ER or wait three days, I tapped my iPad’s DoctorOnDemand (DoD) app and typed in my history and symptoms. Soon, a doctor 200 miles away told me to “say aaah” into the camera. Some 15 minutes later, a prescription awaited me. I was better by the next day.

But telemed isn’t just convenience. At my invitation, Ian Tong, DoD’s chief medical officer, told a national meeting of state legislators, many of them physicians (including some telemed skeptics), how he and his app likely saved a young woman’s life. Ian couldn’t attend the meeting, so we contacted him through the app, projecting his crystal-clear image from my iPad onto a large screen.

Some skeptics wonder whether a physician can adequately serve patients through an electronic device. Ian explained that he himself taught hands-on medical examination at Stanford University Medical School for a decade. Over time, he realized that most of his patient encounters could be safely, effectively conducted remotely — and he can tell when telemed won’t suffice.

Ian recounted a telemed encounter with a 34-year-old woman who might have died had she pursued a routine visit with her own family physician. She suffered nausea, vomiting and diarrhea for four days. Her symptoms had subsided, but she still felt and looked ill. It was evening, and her mother-in-law had seen DoD demonstrated on the “Dr. Phil” show. (Dr. Phil McGraw co-founded DoD, and his son is chairman of the board.) She persuaded her reluctant daughter-in-law to initiate the call.

Ian’s screen showed a young, fit woman with pale lips, speech punctuated by swallows, slow movement for a 34-year-old, pallid lower eyelids and tongue, dry mouth, and poor capillary refill in her fingernail beds. The mother-in-law assisted by measuring her heart rate (108 beats per minute lying flat). When the patient stood, she became dizzy and her pulse quickened.

Ian told her the symptoms suggested dehydration or anemia and indicated a critical need for fluids or blood — the first time he ever advised a telemedicine patient to seek immediate care in an emergency room. The diagnosis was correct. She received three liters of fluid and went home. Had she gone the usual route — calling her doctor the next day to set up an appointment, the end result might have been tragic.

Fortunately, the young woman in this story didn’t live in Texas, where state medical authorities severely restrict telemedicine. You can use telemed, but only with a doctor who previously examined you in person. If your doctor is sleeping, on vacation, with another patient, or not set up for remote consults, you’re limited to pre-telemedicine options.

Some practitioners fear patients’ health will suffer if they visit doctors electronically rather than in person. While there may be such cases, they will likely be greatly offset by cases like the young woman who called Ian Tong — where the convenience of telemedicine leads patients to seek immediate help rather than waiting and hoping. The appeal and quality of telemed will increase as households obtain inexpensive auxiliary devices, such as the smartphone/tablet-compatible stethoscope I own.

Decades ago, my close friend, just past 40, seemed to have indigestion. His wife feared it was more and wanted to call the rescue squad. He apparently thought that was overreach and didn’t want neighbors alarmed by sirens and flashing lights. A short while later, he collapsed and died of a massive coronary. I often think of my long-gone friend and wonder how many people like him will be saved in coming years by the ease and immediacy of telemedicine.