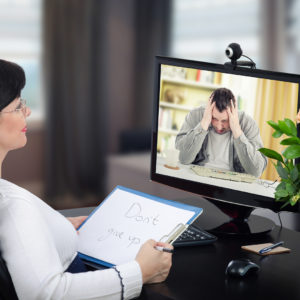 Telepsychiatry, a subfield of telemedicine, brings counseling and therapy to a patient’s laptop, tablet or smartphone.

As frequently happens, the founders were driven by personal history. Genoa Telepsychiatry’s founder came from a family of psychiatrists. David Theobald’s mother suffered from schizophrenia, and he was her guardian for 20 years. A Harvard MBA, Theobald has served on the board of Mental Health America, the largest and oldest advocacy organization in its field.

With telepsychiatry, the patient and psychiatrist have one-on-one encounters, as usual. But rather than in-person visits to the doctor’s office, the two communicate via Skype-like video, offering multiple advantages:

First, it’s convenient. Patients don’t have to take cars or taxis or buses or sit in waiting rooms. They get care at home, at work or wherever. This is especially valuable for those caring for children, working jobs with inflexible hours, or living with mobility issues.

Convenience also permits flexibility. Sometimes, a patient just needs five or 10 minutes of the doctor’s time. With a video encounter, that’s feasible. It’s far less likely that a patient will carve out several hours for a physical visit, solely for a five-minute session.

Telepsychiatrists don’t have to commute between multiple clinics, eliminating traffic delays as a common source of backups in clinics.

Many rural regions can’t sustain adequate local psychiatric care. Money or amenities may not be sufficient to attract doctors. Theobald notes this problem also exists in urban areas like Trenton, New Jersey, with its weak economy and poor infrastructure. And even in vibrant cities, there are broad slums where doctors are unlikely to settle or work. College campuses, filled with tech-savvy students, are also prime telepsychiatry ground.

The CEO of a different telepsychiatry company and several patients whom I know personally mentioned an advantage of receiving care in a comfortable, familiar setting (like home) and getting care the moment the patient is most ready, rather than during some long-predetermined appointment.

Telepsychiatry can take two forms. With synchronous telepsychiatry, the patient and doctor speak face-to-face in real time. With asynchronous telepsychiatry, the patient instantaneously transmits messages in a manner resembling email, and the doctor responds later. The CEO and patients with whom I spoke said a patient might be ready to express himself fully and honestly at 3 a.m. in the comfort of his own bedroom, but perhaps less so during a scheduled 4 p.m. appointment downtown.

Theobald mentioned a residential shelter in the Bronx filled with HIV/AIDS residents. It’s difficult for them to find shelter or work. Ordinarily, they’d be frequent no-shows at doctors’ appointments. But with Genoa’s remote capability, they pop out of bed, log on, and chat immediately with psychiatrists.

This promotes more consistent treatment and greater success. Theobald mentioned one shelter resident with AIDS who recently bounded into a caseworker’s office and announced he had found a job, thanks to his telepsychiatrist.

Then there are potential cost savings. A telepsychiatrist may shed the high costs of maintaining a physical office. Serving broader geographic areas, telepsychiatrists can achieve economies of scale and smoother demand loads.

The medical community can be squeamish about new technologies. Brick-and-mortar offices and in-person visits have a long tradition and comfortable familiarity. Some doctors and policymakers hesitate to open the gates to telemedicine as widely as some of us might like.

This gives rise to a series of public policy questions: Can a patient in one state use a telepsychiatrist and psychiatric nurse practitioners licensed in other states? If so, which state’s liability laws apply? Should Medicaid reimburse nonphysician services related to telepsychiatry, such as the “facility fee” covering providers who take vital signs before the telepsychiatry visit? What should be the rules for telepsychiatrists prescribing drugs — including opioids?

The answers to these and other policy questions will determine how widely and how beneficially telepsychiatry spreads.