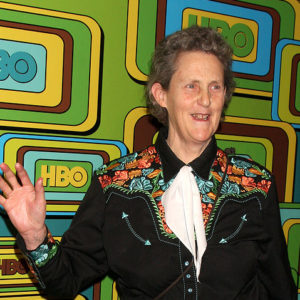 Temple Grandin is one of earth’s most intriguing people. She is arguably the world’s most famous autistic person. At around age four, doctors told her family that she would likely never speak and should be institutionalized for life. Her family refused to accept the medical profession’s received wisdom. Ultimately, she earned a Ph.D. in animal science, occupied a professorship at Colorado State University, and built her own engineering design firm.

In these roles, she helped feed the world more efficiently and made the brief lives of billions of livestock far more pleasant by introducing humane processing methods. Her revolutionary designs for humane feedlots and slaughterhouses initially met fierce resistance from meat-industry insiders. Ultimately, between one-third and one-half of all cattle in the United States are processed through facilities she designed. As a prominent speaker on autism, she helped the world understand the condition as it hadn’t before.

Grandin’s life is a tribute to the virtues of questioning received wisdom and challenging “experts.” These characteristics make her a paragon of entrepreneurship. It’s also a testament to neurodiversity; her accomplishments have come from someone whose brain and thought processes are vastly different from those of most people. Among other things, she is barely capable of comprehending ordinary human emotions.

I first learned of Grandin by reading the late Oliver Sacks’ 1995 book, “An Anthropologist on Mars.” The title comes from her comment that she can comprehend human behavior as one would comprehend an alien species—in an analytical manner, by observation, but not by intuition. (She says her autism allows her to instinctively understand cattle behavior, however.)

Sacks was a neurologist who wrote poetically beautiful accounts of the minds of people with an astonishing array of cognitive conditions. His descriptions are so vivid and surreal that each time I read a Sacks story, I feel less confident about my grasp of the human mind than I was before.

The quiet time over the holidays afforded my wife and me the chance to see a 2010 HBO film, “Temple Grandin,” covering her life from childhood to young adulthood. What a story, and what a film. She is portrayed by the immensely talented Claire Danes. Having viewed many Grandin videos over the decades, it is truly a wonder to watch an actress capture the idiosyncratic voice, facial expressions, and movements for which Grandin is known. Grandin herself has said repeatedly that Danes did a remarkable job of capturing her own mannerisms and behaviors and that the film was spot-on accurate in portraying the intricacies of her autistic mind and of the mechanics of animal husbandry and her designs.

These days, Grandin can explain her own mind in familiar terms. It operates, she says, just like Google Images—a series of pictures, with the added feature that she can animate her memories like a 3-D video file. The movie also brilliantly portrays her mother’s battle against medical expertise, her off-putting (but brilliant) behavior in high school, and the sense of entrepreneurialism that enabled her to overcome the often-misogynistic meat industry’s conventional wisdom.

My own writings, best seen in “Fortress and Frontier in American Health Care,” concern the stubborn inertia—the resistance to change—in the medical professions and in business, along with the virtues of fighting that inertia. Few stories illustrate those realities better than Grandin’s life—beautifully documented in the HBO film. (You will likely need a handkerchief at certain points.) It’s a great story of a child and then an adult triumphing over unthinkable adversity—and of making the best use of one’s differences.

If you ask me to name people I most admire, whose genius changed the world, I’ll rattle off names you’ve likely never heard of. My pantheon includes people like Norman Borlaug (the agronomist who saved perhaps a billion people from starvation through the improved agricultural methods known as the “Green Revolution”), Malcom McLean (the businessman who developed multimodal shipping containers that greatly reduced the costs of international trade), and Raymond Loewy (the father of industrial design who profoundly changed automobiles, railroads, spacecraft, ships, buildings, machinery, kitchens, and corporate logos).

Temple Grandin has an honored pedestal in my pantheon. And the film is an uplifting tale for our troubled times.