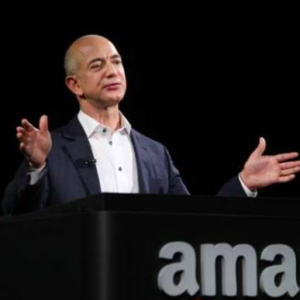 Amazon has been drawing mounting scrutiny from nearly all sides — advocates, regulators and politicians from both sides of the aisle.

But at the company’s annual investor meeting held on Wednesday, Amazon found itself facing harsh criticism from a new front: its own shareholders and employees.

The meeting, held at Fremont Studios in Seattle, provided a glimpse into Amazon’s relentless focus on efficiency. The event was tightly controlled and stage-managed, with a highly visible security presence.

Activists and employees — who came armed with more than a dozen resolutions ranging from discrimination in Amazon’s facial recognition technologies to challenging the company’s efforts to combat climate change — were whisked in and out of the meeting at a breakneck pace and given just a few minutes to voice their concerns, according to shareholders in attendance.

Investors in the room grew increasingly restless as Amazon limited opportunities to address executives, including Chief Executive Officer Jeff Bezos, throughout the event.

“Annual meetings always have a dose of corporate public relations, but this year Amazon took it to new heights,” according to one shareholder in attendance. “It was the most fake and sterile gathering I’ve ever attended.”

“Often, there is some useful give and take, but there was none of that today at Amazon,” the shareholder continued.

Demonstrators, who were protesting a number of issues from unionization of the company’s security staff to its treatment of pilots, lined the premises, creating a chaotic spectacle unseen at most other shareholder meetings.

The hostility was reflective of growing frustrations among not only activists but the broader public, as concerns continue to mount that Amazon’s meteoric growth has made it a target for regulators across a range of issues.

Shankar Narayan, a director of the American Civil Liberties Union, presented a resolution to halt sales of Rekognition, Amazon’s facial recognition technology, to government and law enforcement agencies amidst concerns that it oversteps essential privacy rights.

The ACLU warned in an open letter to shareholders on Monday about the potential for Rekognition to “facilitate unprecedented threat to our civil liberties” and would unfairly target racial minorities and communities of color.

As Amazon held its shareholder meeting, the House Committee on Oversight and Reform was simultaneously conducting a hearing exploring the consequences of the growing use of facial recognition and surveillance technology, and both Republican and Democratic lawmakers voiced concerns with Amazon’s monitoring of unsuspecting Americans.

The National Legal and Policy Center, a public integrity organization, also spoke on a resolution addressing the company’s treatment of women in its workforce and its broader alleged “hypocrisy.” The group raised questions about Amazon’s willingness to prosecute its own employees and executives accused of sexual harassment, despite the company’s reputation for aligning with progressive causes.

In one of the most public rebukes of the company’s leadership, dozens of Amazon employees sat in on the meeting to demand that the company do more to curb its environmental impact and contributions to climate change.

Amazon user experience designer Emily Cunningham, who delivered remarks on behalf of the employees in attendance and the more than 7,700 others who signed on to a public proposal calling on executives to accelerate its sustainability efforts, said “There’s no issue more important to our customers or our world than the climate crisis, and we are falling far short.”

Despite Amazon banning any recording devices from being allowed in to the meeting, video footage of Cunningham’s presentation was leaked online after the meeting concluded.

Cunningham requested to present her remarks — which were delivered on behalf of more than 7,600 employees who signed on to a recent petition — to Bezos directly, but was reportedly refused by Chief Financial Officer Brian Olsavsky. Bezos remained backstage while Cunningham delivered her remarks.

Despite a brief question-and-answer period that allowed select shareholders to question Bezos, shareholders at the meeting expressed displeasure with Amazon’s decision to limit his availability.

One shareholder in the room said “Where is Bezos anyway? I’ve never been to an annual meeting where there is no CEO!”