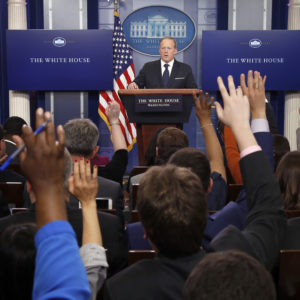 White House press secretary Sean Spicer speaks as reporters raise their hands to ask a question during a briefing at the White House, Tuesday, June 20, 2017 in Washington. (AP Photo/Alex Brandon)
[IS] Opinions

Tensions and Pretensions at the Correspondents Dinner Table

The White House Correspondents’ Association dinner got just too celebrity ridden for its own good, as outfits who don’t know where the White House briefing room is lobbied for more and more tables.

It used to be an annual drunk for journalists to visit each other and see and be seen. It was a chance for the Fourth Estate men to wear tuxedos and women to wear evening gowns and to hit the parties in the hotel suites before and after the dinner — the tickets, it is hoped, paid for by the employers.

Journalists, who used to invite spouses and politicians they wanted to cultivate, were relegated to the D List as the aforementioned outfits and the networks demanded tickets for the Hollywood grandees. For years, as a member of the association, I was offered two tables and took one. But the celebrity cramming reduced my allocation to just two tickets; no chance to impress my potential sources or sponsors for my television program.

Along with celebrities from ZIP Code 20190 came small-time news executives, who leaned on their Washington correspondent for tickets for the publisher and spouse.

Ambassadors and lobbyists begged journalists for tickets. I was even offered money. More commonly, lobbyists would offer to pay for the poor scribbler’s ticket as well as their own. They were glad to let it be known that they’d pay for a table, if they could just get in themselves.

Many excluded hacks were soon showing up at the hotel in dinner dress to see and be seen in the hotel bar and in the corridors. Some hospitality tents on the lawn could be penetrated without a ticket: You could get a free drink and go home to watch the rest on TV. You saw your friends, you were seen, and you saved face along with money. Gradually, the hotel — the spacious if unexceptional Washington Hilton — increased security and pretending to be on the inside got harder.

A former Washington gossip columnist, Patrick Gavin, devoted much of a year to a documentary on the spring perennial, complete with interviews seeking to mine its social significance. It was craziness that had become fashionable, like the running of the bulls in Pamplona.

But the Gatsby-like madness couldn’t go on. The New York Times, always the first to take itself seriously, pulled out in 2011. Then, in 2013, the everyday corruption of Washington (the cozy press relations with politicians and lobbyists) was laid bare in “This Town: Two Parties and a Funeral — Plus, Plenty of Valet Parking — in America’s Gilded Capital.” The author, Timesman Mark Leibovich, fingered the White House correspondents’ dinner as a celebration of all that stank in Washington.

The respectability of the dinner was teetering before President Donald Trump launched his boycott. But there’s a back story. In 2011, President Barack Obama and “Saturday Night Live” comedian Seth Meyers ridiculed Trump for leading the “birther” movement and hosting a reality TV show. Some say that drubbing led Trump to run for president.

Picking a comedian for the dinner has always been dicey, and the association aims for diversity. He or she must be a political humorist and understand that the audience contains people who’ve been drinking and want to get back to it. Any dinner speaker knows a room full of drunks is tough.

This gig is made even more difficult by the presence of the president as patron and target. He should be roasted but left underdone, enjoying his time on the spit — as did Presidents Obama and George W. Bush, who also poked fun at themselves brilliantly.

Drew Carey, who was the comedian at the 2002 dinner, told me it was the most difficult room he had ever worked. Michelle Wolf turned the tables: she, with her vulgarity and rudeness, was the hardest comedian for the room to swallow.